The varsit­y has formed a commit­tee of the Board of Studie­s to look into the matter­
By Our Correspondent
Published: January 5, 2018
Tweet Email 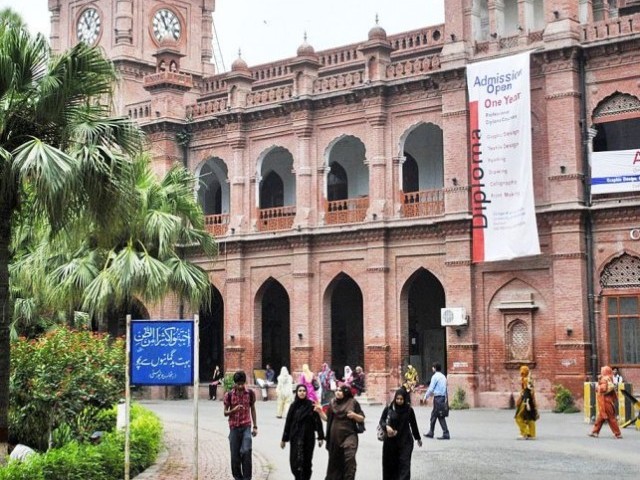 LAHORE: Students of the MSc Space Sciences at Punjab University have alleged that the administration of the department has been victimising them by unjustifiably ‘failing’ students.

A host of other allegations, like teaching staff not showing up for classes, marking bogus attendance for lectures that have not been taken, as well as demanding ‘bribes’ for various activities, are also under investigation, according to reports.

Students of the programme have met the vice chancellor and submitted several formal complaints demanding him to take action against the administration of the department.

The varsity, on the complaints of students, has formed a committee of the Board of Studies to look into the matter.

In one application, available with The Express Tribune, students of MSc for the academic session 2015-2017 say that 14 out of 24 students of their class failed the exam for the subject ‘Telecommunications and Satellite Communications’ for the MSc Part II Annual Examination 2017.

They pointed out several reasons, including out of syllabus questions in the exam, short and irrelevant teaching material, as well as lectures, as a studying resource, the professor not bothering to complete the course he had been assigned to teach, as well as their suspicions regarding the final marking of the exam.

According to the students, the results were also questionable, as there were some in their class who managed to get ‘passing marks’ despite the fact that they had failed to attend a single lecture, whereas ‘regular and competent’ students, who had been academic high achievers consistently throughout their time at PU, had failed.

In their application to the vice chancellor, it was stated that when the students had complained to the chairman of the department, as well the student advisor and controller examination, they were ‘blackmailed and threatened’ by them.

Furthermore, the complaint maintains that the administration made them sign fake attendance for classes they did not attend, claiming that when some students resisted, they were threatened with dire consequences when the results for the examination were announced.

Other grievances made public by the students include the constant misuse of authority by teachers, where students were forced to mark attendance for two lectures so as to ‘complete the credit hours of the teacher’.

According to the application, one lecturer took classes in his office instead of the classroom, only speaking for about 15 minutes.

Another teacher did not even bother to attend a single lecture.

Students were allegedly forced to attend irrelevant seminars, parties and tours, and the administration told them that if they attended these ‘extra-curricular’ activities, they would pass the exam.

In a separate application, also available with The Express Tribune, the students said they were victimised and threatened because of their complaint regarding unfair evaluation. They were also asked to deposit Rs500 for the Prime Minister Laptop Scheme. 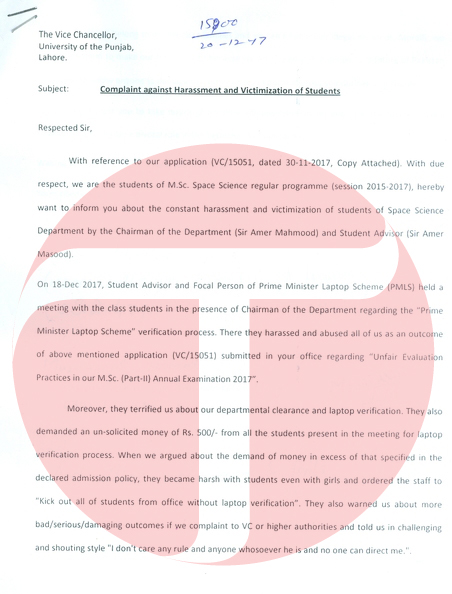 Upon raising objections against the demand of additional money, staff was ordered to “kick out students without laptop verification” as well as other ‘serious’ outcomes if they raised the issue with higher authorities.

When contacted, Punjab University Spokesperson said that the vice chancellor had taken up the matter and forwarded the complaint to the Board of Studies of the university.