Says New Delhi’s stubbo­rn and haught­y approa­ch has made the situat­ion even worse in the valley­
By News Desk
Published: December 27, 2017
Tweet Email 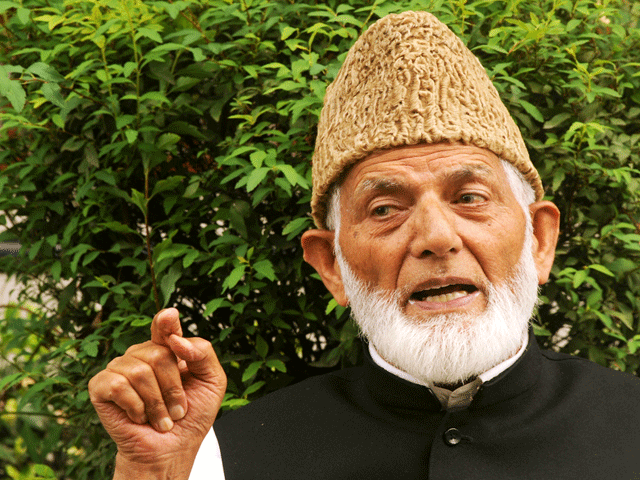 Says New Delhi’s stubborn and haughty approach has made the situation even worse in the valley. PHOTO: FILE

Chairman All Parties Hurriyat Conference, Syed Ali Gilani has expressed serious concern over the prevailing horrendous situation in Indian-held Kashmir, saying the unresolved Kashmir issue is the root cause of tension in the South Asian region, said Radio Pakistan.

In a statement in Srinagar on Wednesday, he said, “New Delhi’s stubborn and haughty approach has made the situation even worse in the valley.”

The unabated Indian state-terrorism will further deteriorate the situation in the held valley, said Gilani.

The APHC chairman also paid glowing tributes to the Kashmiri youth recently martyred by Indian troops in Karnabal and Sambora, and said, civilians are facing an extreme situation during and after the cordon and search operations by Indian forces.

Gilani also welcomed the release of Dukhtaran-e-Millat, Aasiya Andrabi and Sofi Fehmeda. He said, “Aasiya Andrabi is a living example that no torture, no hanging or detention can dampen our sentiments.”

The senior APHC leader also demanded the release of all Kashmiri prisoners languishing in Indian jails.