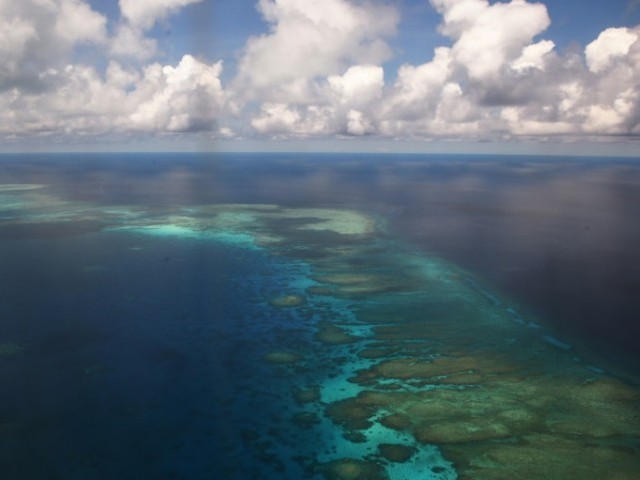 Competing claims to the South China Sea, which is believed to sit atop vast oil and gas deposits, have for decades made it one of Asia's potential military flash points. PHOTO: AFP

BEIJING: China’s large-scale land reclamation around disputed reefs and shoals in the South China Sea is “moving ahead steadily”, state media has reported, and is on track to use giant “island-builders” to transform even more of the region.

Beijing claims nearly all of the sea and has been turning reefs in the Spratly and Paracel chains into islands, installing military facilities and equipment in the area where it has conflicting claims with neighbours.

“The course of construction is moving ahead steadily and a series of striking results have been achieved,” according to a report that appeared Friday on Haiwainet, a website under the Communist Party’s flagship newspaper the People’s Daily.

The projects have “completely changed the face of the South China Sea’s islands and reefs”, the report said.

The aggressive campaign has been a source of contention with neighbouring countries. China’s sweeping claims overlap with those of Vietnam, the Philippines, Malaysia and Brunei, as well as Taiwan.

“To improve the livelihood and work conditions of people living on the islands, and strengthen the necessary military defences of the South China Sea within China’s sovereignty, China has rationally expanded the area of its islands and reefs,” it said.

The sea is believed to hold vast oil and gas deposits and $5 trillion in annual trade passes through it.

The report noted that with last month’s introduction of the new super-dredger Tianjing, a “magical island building machine”, and other “magical machines” soon to come, “the area of the South China Sea’s islands and reefs will expand a step further”.

China is also building a floating nuclear power plant, the report said, to provide power for those living in the Sansha city area.

Sansha lies on Woody Island in the Paracel chain – which is also claimed by Vietnam and Taiwan – and administers much of China’s claims in the South China Sea.

China established Sansha in 2012 by unilaterally awarding it two million square kilometres of sea and declaring it the country’s largest city.

Earlier this month a US think-tank released new satellite images showing deployment of radar and other equipment on the disputed islands.

The Asia Maritime Transparency Initiative said that over the course of 2017, China had been advancing the next phase of development with construction of infrastructure to support air and naval bases, such as underground storage areas and large radar and sensor arrays.

“We believe that some individuals are making a fuss about this. They’re trying to hype it up,” said foreign ministry spokesman Lu Kang after the first report was published.