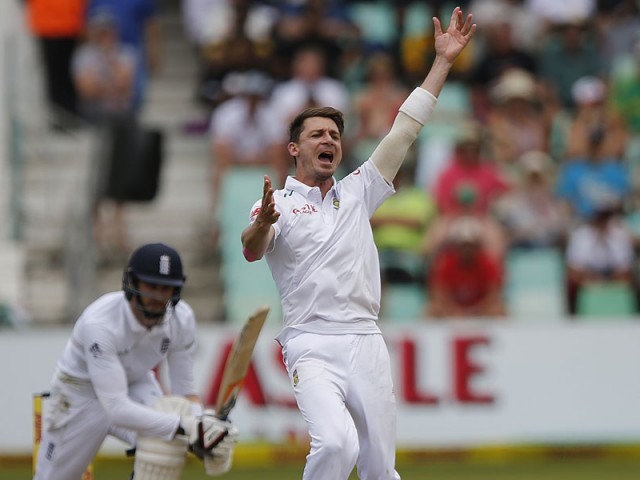 PAARL: Dale Steyn doesn’t want to talk about the possibility of becoming South Africa’s all-time leading wicket-taker, he said during a steady comeback to long-form cricket on Wednesday.

Steyn was not among the wickets for a South African Invitation team on the first day of a three-day day-night match against the touring Zimbabweans at Boland Park, but was happy with his rhythm ahead of an expected Test comeback against Zimbabwe in a day-night clash in Port Elizabeth, starting on Tuesday.

Steyn, 34, needs just five wickets to overtake Shaun Pollock’s record of 421 Test wickets — but it has been more than a year since he took his 417th wicket, shortly before breaking down with a freak shoulder fracture against Australia in November 2016.

It was his third major injury in just over a year. He has only played in four of South Africa’s last 25 Tests.

The Zimbabweans struggled to 196 all out, with only the experienced Hamilton Masakadza playing a substantial innings.

Steyn bowled 12 overs in four spells, including one with the new pink ball, conceding 16 runs. He started by bowling three consecutive maiden overs with the new ball, having a confident appeal against Solomon Mire turned down and then having Masakadza dropped at point on one.

Steyn said he was fully fit and pain-free. He had not tried to bowl at express pace on Wednesday, concentrating on finding his rhythm without revealing too much to the Zimbabweans in case he was picked for the Test.

That, though, seems likely because Steyn will only play the first two days of the current game before joining the South African Test squad in Port Elizabeth.

“I am still fitter than the youngest guys in the side,” he said. “It was just about getting through this year and trying to decide whether I still wanted to do it… I’ll play until I’m not good enough or someone’s better than me. Every time someone talks about a record I get injured. So I’m not bothered. Let’s just go play. Let’s see what happens.”