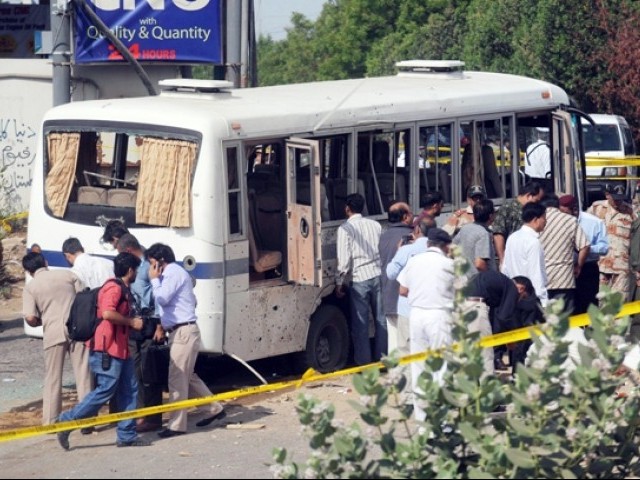 Navy investigators gather around a bus at the site of the bomb attack in Karachi on April 28, 2011. PHOTO: AFP

KARACHI: A roadside bomb hit a bus carrying Pakistani navy officials in the port city of Karachi on Thursday, killing five people and wounding at least seven, officials said, the third attack on the navy in less than a week.

“The bus was taking navy officers to a dockyard when a planted bomb exploded nearby,” senior police official Tahir Navaid told Reuters. A civilian car and motorcycle were also damaged.

Militants linked to al Qaeda and Taliban have carried out several attacks on the Pakistani army and airforce which spearhead offensives against them in their northwestern strongholds near the Afghan border.

The insurgents have not targeted the navy in the past and security experts say the attacks on the navy, seen as a soft target with less effective protection, could be part of a new strategy to widen their violent campaign.

Pakistan army chief General Ashfaq Kayani last weekend said his forces had broken the back of militants. The insurgents, however, have waged a campaign of bomb and suicide attacks across the country in retaliation for military offensives against them.

Express 24/7 correspondent Shaheryar Mirza reports that most of the injured are in stable condition.

“A pedestrian was killed and 15 others were wounded,” Sharfuddin Memon said of the attack which took place in the city’s busy Faisal avenue.

“One lady doctor and one officer were martyred in the attack and nine other officials were wounded in the bomb blast,” a senior naval official told AFP.

Express 24/7 correspondent Shaheryar Mirza confirms that one more person has succumbed to their injuries, increasing the death toll to three.

Among the dead are a lieutenant and a doctor, reports Mirza.

Officials state that the bomb was an improvised explosive device (IED) which was planted in a gutter by the road. Traffic on Shahra-e-Faisal road has come to a halt in the wake of the explosion.

At least 15 people have been wounded in the explosion, reports AFP. 35 navy personnel were on board the bus at the time of the blast.

Witnesses say the explosion could be heard one kilometre away.

agentdodo My heartiest condolences to all the Navy personnel and their families, the pain of losing a loved one! Can’t even imagine it!Why the Navy Y?

NaheedMustafa The navy’s taking it hard in Karachi. Another attack on its personnel. via @mirza9

shakirhusain This waking up to blasts has got to stop. Can Mr Malik focus on Karachi instead of the bookies?

Express 24/7 correspondent Shaheryar Mirza reports that the explosive device was planted next to a gutter on the roadside and was detonated when the bus approached.

Reports state that the explosion took place when the vehicle was on main Shahra-e-Faisal road. 35 navy personnel were on board at the time of the explosion.

Two navy personnel have been killed in the explosion, while several others are injured. The injured are being rushed to a nearby hospital for treatment.

Initial reports state that a nearby petrol pump has also been destroyed in the explosion.

Police and Rangers have arrived at the site and cordoned off the area, but it is not known how many people were injured.

Earlier this week, two navy buses were targeted in separate parts of the city.Four people died and about 56 were injured as a result of the explosions. The Taliban claimed responsibility for those attacks.

One ANP, two PPP workers among six gunned down