Birds of prey: Pakistan's vultures are dying out

Birds of prey: Pakistan's vultures are dying out 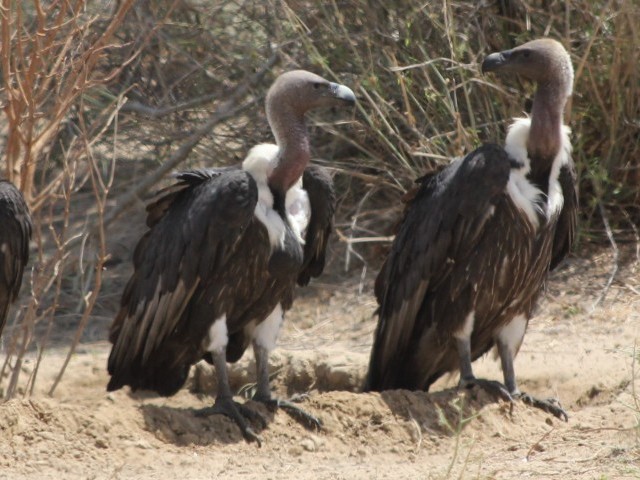 AT RISK: The reason behind the death of vultures and a disease called visceralglout was due to renal failure, according Worldwide Fund for Nature - Pakistan Wildlife Manager Hamera Aisha. PHOTO: COURTESY WWF-Pakistan

KARACHI: Vultures that are supposed to clean the environment by eating the carcasses of dead animals have almost vanished from Pakistan.

The steep decline in their numbers – more than 95% of the vulture population has been wiped out since the mid-1990s- is a result of the use of industrial drugs to breed cattle whose carcasses the birds traditionally feed on.

The critically endangered oriental white-backed vulture and long-billed vulture have compelled the international community to take steps to ensure that the species does not die out completely. Pakistan is home to eight species of vultures.

The Nagarparkar area of Tharparkar district serves an important nesting and breeding ground for white-backed and long-billed vultures. Long-billed vultures have only been sighted in the Karoonjhar Mountains. “Historically, [Karoonjhar Mountains] are their only breeding ground in Pakistan and has also been recently declared a reserve,” said wildlife manager at the Worldwide Fund for Nature (WWF) – Pakistan, Hamera Aisha.

The primary cause of the decline and ongoing threat faced by vultures is consumption of livestock carcasses containing residue of non-steroidal anti-inflammatory drugs (NSAIDs), principally diclofenac, she told The Express Tribune.

Through necropsy and toxicological studies, it was found that the reason behind the death of vultures and a disease called visceralglout was due to renal failure as they had white marks around their kidneys.

Unloved vultures fight for their survival in Pakistan

In 2006 this initiative was able to achieve a ban on diclofenac, its manufacturing and use in Pakistan as an outcome to successful lobbying with the federal government but diclofenic is still used along with aceclofenac, ketoprofen and flunixin, which is also unsafe for vultures, remarked Aisha. She added lobbyists are suggesting the use of a safer alternative drug called maloxicon.

She reiterated that apart from this overall threat, other threats include the cutting of nesting trees of white-backed vultures for livestock fodder and fuel wood.

As part of this initiative, WWF-Pakistan established a Vulture Safe Zone (VSZ) in 2012 covering an area of 100 kilometres in diameter in Nagarparkar, which hosts the remaining breeding population of endangered white-backed and long-billed vultures.

Vulture population monitoring and assessment studies together with livestock availability studies have also been conducted to determine population trends and identification of important nesting sites, critical to streamline conservation actions in Nagarparkar.

The vultures’ on-site conservation work in Nagarparkar was conceived using a holistic approach, integrating conservation research, advocacy, community empowerment and awareness to ensure a sustainable wild population of remaining vultures and long-billed vultures for whom the Karoonjhar Mountains is the only breeding and nesting ground. The white-backed vultures make their nests on trees, whereas long-billed make them on hills.

WWF-Pakistan has been working towards off-site conservation of critically endangered white-backed vultures for more than a decade.

The Gyps Vulture Conservation Centre in the Changa Manga Forest Reserve near Lahore is the only off-site conservation initiative in Pakistan which is dedicated to protecting the current population along with a captive breeding programme to increase the birds’ population since 2005 after India launched a campaign to protect the population of vultures in the region.

The facility currently houses 15 white-backed vultures, of which four pairs bred successfully during the past two years. The total number of vultures, including four chicks, is 19.

According to Aisha, vultures have a cultural association with the funeral rites of Zoroastrians, who place the bodies of their deceased on Towers of Silence, where their flesh is consumed by vultures.

She said that vultures have an important environmental role to play as they perform large amounts of work for free, since the carcasses of animals take time to be disposed of and create environmental hazards. “When the vultures are no more in the ecosystem then their role or service ends and they is taken by other scavenger animals and birds, hence the population of dogs, kites and crows flourishes while disrupting the balance of the ecosystem,” Aisha added.