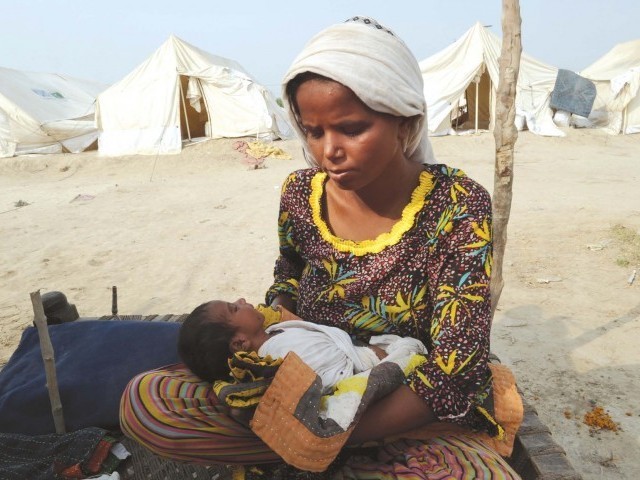 An internally displaced woman tends to her 10-day-old baby born at a tent camp in Sukkur. Photo: AFP

KARACHI: Globally, 1.62 billion people in developing and developed countries are affected by anaemia, of which iron deficiency anaemia is the most common. Of the people suffering from anaemia, around 100,000 maternal and 600,000 perinatal deaths take place each year causing an economic loss of up to $0.32 per capita or 0.6% of the gross domestic product, according to the White Ribbon Alliance for Safe Motherhood, a non-profit organisation.

December is celebrated as the month of anaemia awareness worldwide. Anaemia is a condition where there is a decrease in the red blood cells (RBC) or haemoglobin in the blood, which lowers the ability of the blood to carry oxygen.

‘Prevalence of anaemia rising among women’

The health and nutrition status of women is considered the defining status of the health of a nation. However, the prevalence of malnutrition in South Asia has estimated to host half of the world’s malnourished children and mothers.

The National Nutrition Survey (NNS), 2011, revealed the least progress in nutritional status of mothers and children in Pakistan. The data showed that 43.7% of children less than five years of age were stunted and 31.5% underweight. Despite a number of interventions, the situation has yet to improve, said Jhipiego Pakistan Senior Technical and Programme Adviser Dr Farhana Shahid.

“However, the situation of anaemic women in Sindh is alarming and the revealed that 62% of non-pregnant mothers and 59% of pregnant mothers were anaemic,” White Ribbon Alliance National Manager Dr Asma Babar told The Express Tribune.

The Sustainable Development Goals, for which Pakistan is a signatory, covers all forms of malnutrition, including maternal anaemia, and calls for achieving a 50% reduction among women of reproductive age by 2025, which requires a relative reduction of 6.1% per year.

Pakistan stays at the 180th position out of 185 in countries ranked from lowest to highest in terms of anaemia prevalence in women of the reproductive age group.

“Anaemia bears consequences for generations to come in terms of poor pregnancy outcomes for both mother and newborn. It increases the risk of infant mortality, premature delivery, low birth weight babies and reduced cognitive abilities in children, which can lead to poor school performance in later years,” said Dr Shahid.

She maintained that the use of iron folic acid is a key strategy to address the issue of anaemia in mothers, but cultural myths and a lack of effective counseling by health care providers is causing a serious setback in decreasing the rising ratio of women with malnutrition.

However, folic acid is a manmade form of vitamin B called folate, which plays an important role in the production of RBCs and helps the fetal’s neural tube development into brain and spinal cord.

According to her, iron folic supplements are distributed free of charge to pregnant women starting from the second trimester as part of the care by maternal and child health services. However, consumption of the supplements remains as low as 40% in urban settings and 38% in rural settings.

Following the seventh National Finance Commission Award, 2009, the devolution of powers provided an opportunity to provinces to allocate funds for nutrition. Sindh was first to allocate a separate budget for nutrition in 2013. The provincial government allocated Rs158 million as an initial amount but it lapsed. Similar allocations were made in the next year but also remained unspent, said Dr Babar.

Lives of thousands of pregnant women at risk: UN

Currently, the nutrition support programme in Sindh is carried out in nine districts, Kamber-Shahdadkot, Larkana, Kashmore, Jacobabad, Tharparkar, Badin, Umerkot, Sanghar and Tando Mohammad Khan, with Rs3.6 billion provided by the World Bank as a loan, while the government’s share is Rs421 million for the nutrition PC-1 for five years that started in 2015.

However, the total allocation for fiscal year 2017-18 is Rs196.89 million, out of which Rs98.4 million has been released with no expenditure carried out in five months, according to the Sindh finance department’s website.