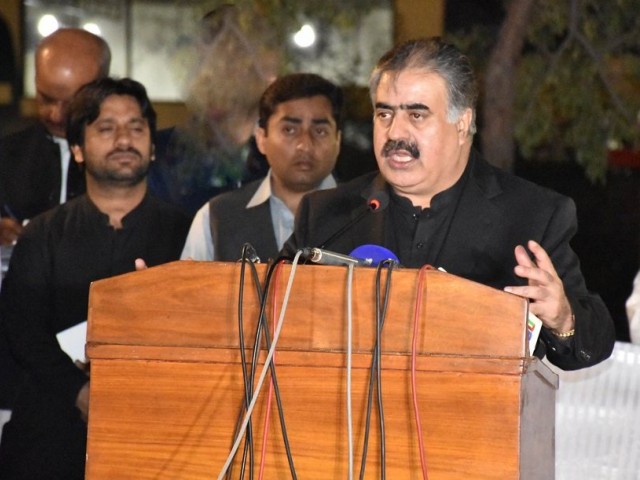 QUETTA: Chief Minister Sanaullah Zehri has said Balochistan is ready to fully play its vital role in the economic stability of Pakistan, as all development routes of the country’s progress – including China Pakistan Economic Corridor (CPEC) – pass through this province.

“Increasing unemployment paves the way for the foreign agencies and their paid agents to deceive our youngsters and use them against the country that results in killings.

“The steps taken for the economic stability of the province will not only bring prosperity in life of the common men but will also help in improving the security situation in the country,” Zehri said on Friday while addressing at the concluding session of the two-week National Security Workshop (NSW).

The first ever NSW was arranged by the National Defence University (NDU) Islamabad in Quetta.  Around 56 parliamentarians, people from academia, tribal elders, bureaucrats, media men and representatives of the civil society participants in the workshop.

Zehri said holding a security workshop in Quetta had helped the Balochistan’s leadership to understand the affairs with reference to national security. “This workshop will also be helpful in evolving strategy regarding security and policy making.”

The CM said Baloch people had ruled Balochistan since it was given status of a province but due to bad governance, negative thinking and wrong policies the law and order situation had remained disturbed.

“In view of the situation, the present government, is discouraging negative thinking through good governance and has made positive policies for the development of the province and for education and guidance of youths in the right direction.”

Zehri said police and levies force were being reorganised for betterment of law and order in the province and government was providing training to the security personnel of both the institution on modern lines.  He said elite force was also established in the province to cope with terrorism.

Marri warns of unrest if Baloch left out

“We have foiled the so-called independence movement in the province and soon we will overcome the religious terrorism with the cooperation and sacrifices of our security forces,” he concluded.

MQM-P calls for unity of Sindhis and Mohajirs