Locals call for a memori­al to be built on the crash site
By Zubair Ayub
Published: December 8, 2017
Tweet Email 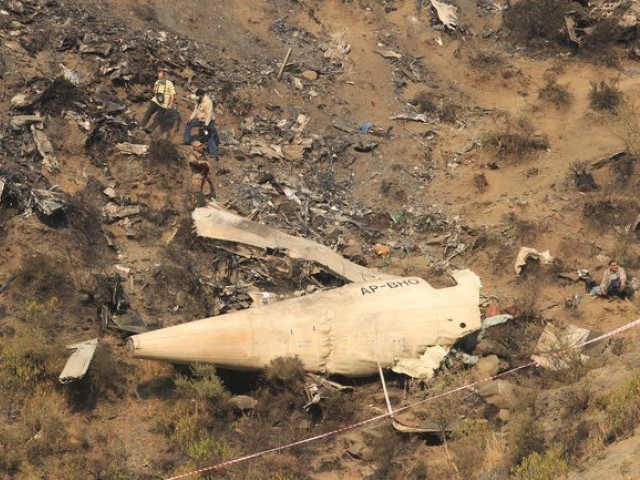 Locals call for a memorial to be built on the crash site. PHOTO: FILE

ABBOTTABAD: Locals and students of different from schools visited Batloni village in Havelian on Thursday, the site where the Pakistan International Airlines flight PK-661 had crashed exactly one year ago today.

They offered prayers for the 48 people, including 42 passengers, five crew and one ground technician, who perished in the crash. A wreath of flowers was also laid at the site where the ATR-42 had gone down.

A smartly turned up contingent PT Platoons comprising school students offered a salute to the victims.

Locals from nearby villages also turned up and together they all recited verses of the Holy Quran and distributed food and other items they had specially made for the visitors.

Many who gathered said that they wish to construct a memorial at the site, subject to government permission.

Chaudhary Mir Hussain, who owns most of the land in the area, told the gathered media that he wants to build the memorial using his
own funds.

While it has been a year since the plane had crashed, the site still sports the black spots where the intense fire from the burning wreckage had scorched the earth.

Karim Baba, a local elder, remarked that over the past year, not even a single blade of grass had grown in the area.

While most of the plane’s debris was removed, one can still find some small parts embedded in the ground.

While a special, albeit temporary road — funds to the tune of around Rs2.5 million were provided by local MPA Aurangzeb Naulotha, the promise by the provincial government to build a permanent metaled road have yet to materialize.

They said that they had seen the plane, which first circled one of the hills of Havelian at around 4:18 pm. A few minutes later, they saw the plane plunge into the hill at high speed. As it met the ground the entire hill, it seemed, had caught fire.

Locals soon rushed to the spot. But they could not get too close to the plane due to the intense flames. Despite that, they managed to pull some of the bodies out.

Opposition moves House against US embassy in Jerusalem