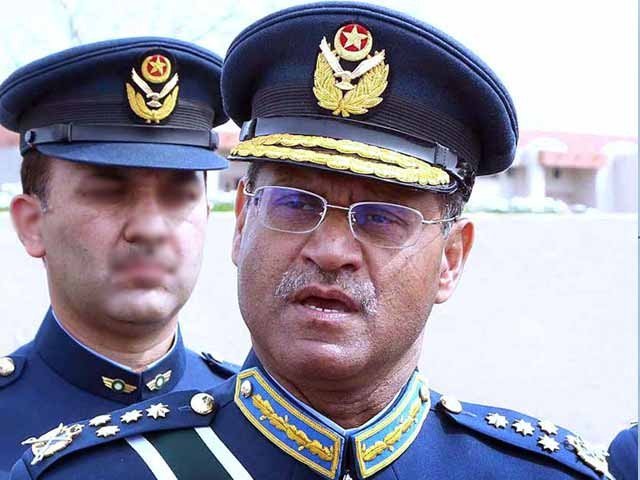 Chief of Pakistan Air Force (PAF) Air Chief Marshal Sohail Aman has said that the PAF could shoot down any drone which violates the country’s airspace.

Talking to an audience in Islamabad, Aman said that the attack on Kamra Air Base was the biggest and most unfortunate tragedy in the PAF’s history.

“We suffered a lot of losses in the incident but did not lose our morale. In fact, we have continued the fight against extremism with unflinching vigor and resolve since then, transforming the PAF into a much stronger force.”

Talking about the terror threat emanating from Afghanistan, the air chief was of the opinion that where dozens of countries in the world had failed, the PAF had been successful in bringing about peace.

“Even Indian defence officials attest to our successes on the battlefield,” Aman boasted.

The PAF chief also informed the gathering that in the attack on Kamra Air Base, terrorists managed to destroy one PAF SAB plane completely, and also inflicted considerable damage upon another.

PAF has been at forefront in war against terrorism, says Air Marshal Sohail Aman

“An international organisation wanted $287 million to to cover the material damage that the PAF sustained in the attack, but Pakistan’s bright, young scientists and engineers added two new, fully-functioning fighter planes to our fleet at a fraction of the cost,” Aman said.

“After the attack on Kamra Air Base, not only did we set out to make the PAF better and stronger, but we were also determined to guide the nation towards self-sufficiency. Now, Pakistan will make its own fighter jets.”

He also stressed that there was no shortage of talent in the country, but rather that the keen minds present here needed a platform on which to showcase their exceptional talents to the world.

Discussing security issues at large, the PAF chief noted that the region the country was based in was beset by different challenges and difficulties at the moment.

“Pakistan is unfortunate in the sense that our neighbours are trying to harm us. India, being our sworn enemy, was behind the attack on Kamran Air Base. What do terrorists want from PAF planes?” he asked.

We cannot, though, change our neighbours, Aman lamented.

“No outside power can engineer a democracy inside a country, nor is democracy the solution to every problem. Examples in Iraq and Libya are in front of us. After the fall of Qaddafi and Saddam, what happened in these countries? Did they get democracy?” Sohail Aman said while talking about Middle Eastern affairs.