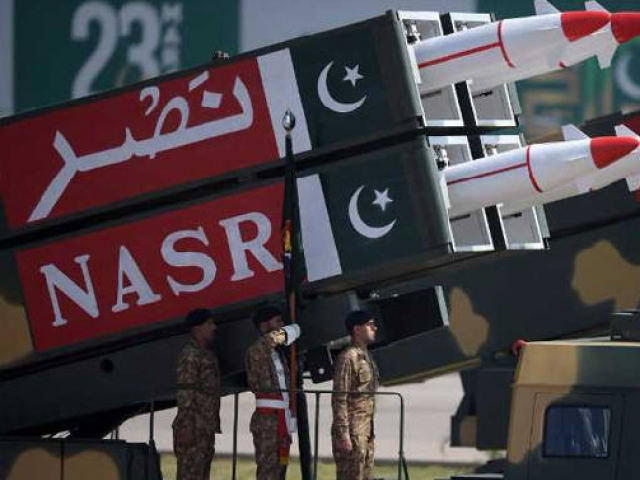 KARACHI: A US-based think tank has ruled out the possibility of an all-out nuclear war between nuclear-armed states in Asia.

Atlantic Council in its new report, ‘Asia in the Second Nuclear Age’ maintained that Pakistan, China and India, despite being enmeshed in a complex rivalry, “are stakeholders in the existing international order, and are committed to an open economic order and multilateral institutionalism.”

Rejecting the nuclear pessimism in Western capitals, the report said the nuclear ‘sky is falling’ argument, is simply not supported by the evidence, at least when evidence is embedded in its proper context.

However, the report maintained, Pakistan’s tactical nuclear weapon programme has the capability of escalating conventional war into an all-out nuclear war.

The difference between China, India and Pakistan’s nuclear capability and what drives their programmes has been scribed in detail after conducting workshops in the capitals of those countries.

The Atlantic Council’s South Asia Center conducted three workshops in Delhi, Islamabad and Beijing in the the fall of 2016, with the objective of drawing academics, policy practitioners, and analysts in each country to discuss the unfolding nuclear dynamics in the region. All three workshops had a common theme: Assessing Nuclear Futures in Asia.

Under this broad theme, workshop participants tackled three specific subjects: the general nature of the strategic competition in Indo-Pacific region; the philosophical approaches shaping nuclear developments in China, India and Pakistan; and the hardware and operational characteristics of their nuclear forces.

It was maintained that Pakistan is rapidly accumulating fissile material, which could increase to 450 kilogram of plutonium, sufficient for 90 weapons, and more than 2,500-kg of highly enriched uranium (HEU), sufficient for 100 simple fission warheads by 2020.

China, however, is no longer producing fissile material. It is only modestly increasing the size of its arsenal, from 264 to 314 warheads. The size of the Chinese, Indian and Pakistani arsenals will remain a function of the calculations of damage ratios that each believes essential to achieve deterrence.

Yet, if current trends remain stable, the size of their arsenals should remain comparable to the French and British nuclear arsenals. The arsenals will be large, but will by no means approach the humongous size of the US or Russian nuclear arsenals. Like other regional nuclear powers during the first nuclear age, China, India and Pakistan might also decide to forego one or more vulnerable legs of their nuclear triad. At present, however, there are no indicators of this happening.

As established before, unlike China and India, Pakistan is committed to an asymmetric nuclear strategy of first use.  The report said some details had emerged about Pakistan Army’s internal thinking on what this might entail.

The much talked out ‘red-lines’ include: an Indian invasion and a major defeat for army on the battlefield, Indian threats to major Pakistani urban centers, the severing of Pakistan’s major internal lines of communication during an invasion, or any attempts by India to internally destabilise Pakistan.

These boundaries are vague in order to keep the enemy guessing while leaving enough room for the military to ‘walk back from a crisis of resolve and credibility’.

The confusions, however, remains over the nature of Pakistan’s nuclear response. According to analysts, Pakistan may initially demonstrate its nuclear resolve via token strikes against invading and isolated Indian units on Pakistani territory. Thereafter, attacks may escalate to Indian bridgeheads on the border, and area military targets critical to the invasion. Further still, attacks could encompass Indian cities, and portions of the nuclear force itself.

The report conclusively stated that politically, the regional competitors do not find themselves in security dilemmas in which the existence of their political systems is at stake the way it was during the Cold War.

Ask Asad: My parents are against my double first-cousin marriage. How should I convince them?