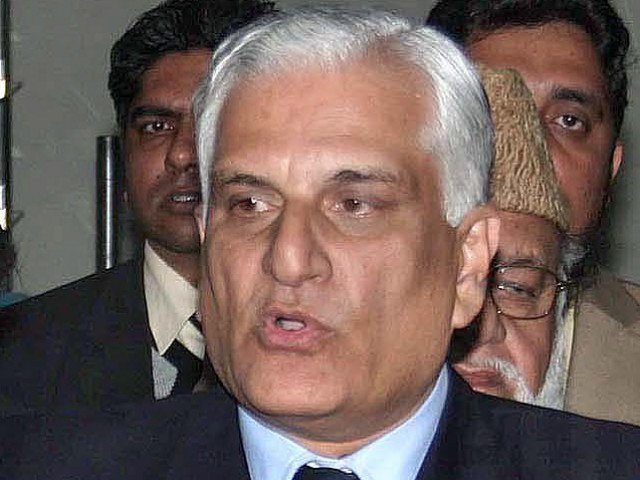 LAHORE: Resignation of ministers is among the options to defuse the stand-off caused by the lingering protest by a religious group near the federal capital, according to Punjab Minister Zaeem Qadri.

The comments came after Law Minister Zahid Hamid met Chief Minister Shehbaz Sharif in Lahore on Sunday. Qadri said multiple options were discussed in the meeting and resignation was one of them.

He said the government would make another attempt to persuade the protesters to call off their protests and address the matter on the negotiating table. Despite the turn of the events on Sunday where the state authorities appeared incapacitated in taking any meaningful action against the protesters, he said the government could also consider the use of force if the matter was not resolved amicably.

Faizabad crackdown: We can’t use force against our own people, says COAS

According to sources, the law minister, who is ready to resign, is concerned about his safety. His ancestral home in Pasrur also came under attack from protesters on Saturday.  He discussed his safety concerns at length with the chief minister in the meeting that lasted about an hour.

Hamid reportedly said he was ready to resign but wanted the Pakistan Muslim League-Nawaz (PML-N) leadership to play an active role in clearing his name from the controversy.

The minister also released a video message on Youtube to assure the people that he believed in the finality of Prophet Muhammad (PBUH).  He read out the oath from the existing law and said, “I believe in finality of Prophethood. I am not a follower of any claimant of prophethood, nor do I believe that any such claimant of prophethood is a Muslim. Neither do I belong to any Qadiani Group or Lahori group, nor do I call myself as Ahmadi.” He said the Constitution of Pakistan declared Qadianis, Ahmadi Group and Lahori Group as non-Muslims. “I love Hazrat Muhammad (PBUH) from the core of my heart and am a true lover of the last Prophet (PBUH). I and my family are prepared to lay down our lives for the honour and sanctity of Prophet Muhammad (PBUH).”

The message is yet another attempt from Hamid to clear his name from the controversy that may jeopardise not only his political career but also his life. Some reports suggest that two ministers, including Hamid, may tender resignation if the stand-off persists.

PML-N Chairman Raja Zafar Ul Haq has also said that one or two resignations from ministers are a small price to pay if it means ending the protests. Talking to The Express Tribune earlier he said that all these protests could have been avoided if action on his report was taken on time. Haq headed a committee formed by former prime minister Nawaz Sharif to investigate the controversy. He said the details ascertained by the fact finding committee were included in a report submitted to the party president.

Surprisingly, Interior Minister Ahsan Iqbal during a TV interview rejected claims of his party’s chairman. He said that despite being a part of the three-member committee, he was not aware of any such report. “I have not signed any report,” he said, rejecting claims that the document was awaiting action from Sharif.  Punjab Law Minister Rana Sana Ullah also rejected Haq’s claims.

Meanwhile, Chief Minister Shehbaz Sharif issued a statement, saying Pakistan was the motherland of all citizens who should work together with complete harmony for the sake of the country. He said the importance of national unity and brotherhood had increased in the current circumstances.

“The circumstances demand unity and we should work with unity for progress in the country. We should ignore mutual differences and spread the message of unity and harmony, and for the bright future of the country we have to work jointly for the national interest and ignore personal interests.”

He said “we all should think about Pakistan and live and die for Pakistan because Pakistan is our identity and our survival depends on the existence of Pakistan”.

The chief minister said harmony and unity were indispensible for the progress of the country. He said the unity and harmony displayed during the Pakistan Movement were also needed now. “Pakistan was created as the result of untiring efforts and huge sacrifices of our forefathers and we should work with harmony for the sake of the motherland. The promotion of unity and harmony is the need of the hour and all segments of society have to work positively for this purpose.”

PML-N opts not to wind up ‘parliamentary system’