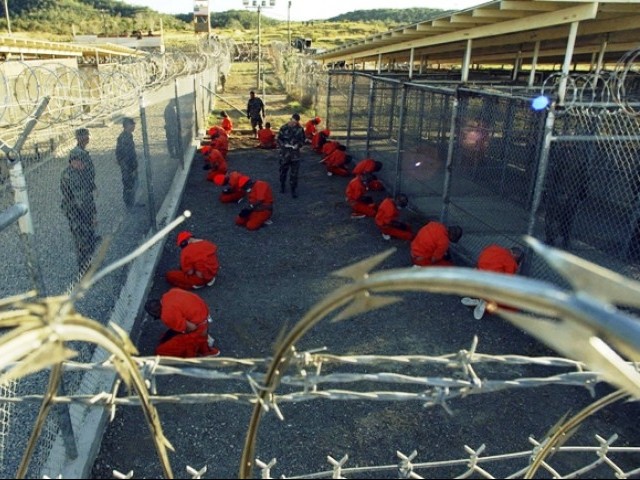 Detainees in orange jumpsuits sit in a holding area under the watchful eyes of military police during in-processing to the temporary detention facility at Camp X-Ray of Naval Base Guantanamo Bay in this January 11, 2002 file photograph. PHOTO: REUTERS

Guantanamo detainees confessed to working with the Inter-Services Intelligence (ISI) and the Pakistani military in facilitating al Qaeda and the Taliban, according to leaked US classified documents released by WikiLeaks on Monday.

According to the documents, the US had designated the ISI as one of the 32 “militant forces or organisations” with which al Qaeda or the Taliban had or has “an established working, supportive, or beneficiary relationship for the achievement of common goals”. The Iranian intelligence, Hamas and Jaish-e-Mohammad were also included.

However, when contacted regarding the documents, Director-General Inter-Services Public Relations (ISPR) Major-General Athar Abbas refused to comment. “Is there a source attached to these documents? Are they authentic? It appears to be an effort at instigation. We will not issue official statements on documents that we do not know the authenticity of. Let the Pentagon comment and then we will see.”

An ISI spokesperson also declined to comment on the documents until they had been properly analysed.

Hundreds of documents regarding the backgrounds and interrogations of Guantanamo Bay detainees by the US were published on Monday, which point to al Qaeda’s role and operations and the intelligence gathered by Pakistan and the US to capture suspects. However, the documents do not mention the harsh interrogation techniques used at Guantanamo under which these ‘confessions’ were extracted. A lot of the information cited in the documents is also said to be third-party intelligence.

The documents come just days after US Chairman Joint Chiefs of Staff Admiral Michael Mullen launched a tirade against the ISI and its links with another al Qaeda/Taliban affiliate, the Haqqani Network – a claim that was vehemently denied by Pakistan.

A summary of the key findings of the new leaked documents released by WikiLeaks is below:

According to a document about Afghan detainee Abdul Rehman, mid-level Taliban commander Mullah Abdul Satter attended a meeting with Mullah Mohammad Omar in Quetta. “The meeting included high-level Taliban leaders Mullah Abdul Bari, Mullah Mohammed Nabi, Mullah Akhtar Mohammed Osmani, representatives from the Pakistani government and the ISI. Mullah Omar told the attendees that they should not cooperate with the new infidel government (in Afghanistan) and should keep attacking coalition forces.”

Detainee Haroon al Afghani was assessed to have attended a joint operations meeting in 2006 with commanders of the Taliban, Lashkar-e-Taiba (LeT), Pakistani military and intelligence officials and the ‘Islamic Party’ (believed to be a reference to the Hezb-e-Islami Gulbuddin – HIG). It was decided in the meeting that operations in Kapisa, Kunar, Laghman and Nangarhar provinces would be increased – including suicide bombings. Al Afghani is also said to have facilitated travel within the Federally Administered Tribal Areas (Fata) in Pakistan and provided intelligence on al Qaeda’s work there. He is also noted “to have provided information on ISI assistance to extremist groups operating in Afghanistan and Pakistan and may have additional information on their associations and activities.”

A Yemeni detainee said he had witnessed a meeting in Kandahar between Osama bin Laden, Pakistani intelligence agents and tribal leaders loyal to bin Laden.

Corruption within the ISI

Afghan detainee Rohullah Wakil was alleged to be an al Qaeda supporter, who provided information on corruption within the ISI and its support to al Qaeda.

“In January 2002, ISI financed the efforts of several factions in Konar province in order to destabilise the Afghanistan Interim Administration (AIA). ISI reportedly called for a meeting, Rohullah along with Malik (Zirin) attended from Afghanistan. In March 2002, the ISI reportedly provided detainee with $12,000 to finance military operations against the AIA in hopes of destabilising the new government and disrupting the Loya Jirga.”

According to the analyst’s notes, Wakil may have “negotiated the exodus of Arabs out of Tora Bora into Pakistan, possibly with the help of the ISI, for a price.”

The document also notes that he had dealings with the UK and the ISI, and while he supported the AIA he was also undermining the transition process.

Australian detainee David Hicks is also reported to have dealings with the ISI.

In one document, an analyst notes that “rogue factions of the ISI have routinely pursued private interests and acted against the stated policy of the government of Pakistan.” Detainee Nasser Gul, assessed to be a high-level HIG commander is reported to have “also worked with rogue elements of the ISI”. An analyst notes that the ISI has strong ties with the LeT “in regard to insertion tactics into Kashmir”.

A document about Guantanamo Bay detainee Abdul Kakal Hafiz puts up massive allegations against the Pakistan army. “In January 2003, anti-coalition militia groups under the command of Mullah Haji Satar, Mullah Abdul Basir, and Mullah Abdul Hakim trained in the Khadar Tana Toba region, Zabul Province, next to the Afghanistan-Pakistan border. Three Pakistani military officers provided one month of training for the group in explosives, bomb-making, and assassination techniques. This training was conducted in preparation for a planned spring campaign to assassinate Westerners.” The detainee is implicated in the ambush of the International Committee of the Red Cross’ convoy in which one volunteer was killed.

Yemeni detainee Abd al Malik abd al Wahab is reported to have travelled to Karachi and stayed at the home of Mohammad Iqbal, a friend of his father. Iqbal’s son, Ahmed Mohammad Iqbal, was reportedly a fighter in Kashmir and attempted to recruit Wahab. However, Wahab said he would not fight there but would accept the training. Wahab confessed that he “attended a 15-day military-style training camp in Pakistan sponsored by the Pakistani army.”

“The camp concentrated on aquatics training and did not involve weapons training. The training consisted of swimming above the water while dragging a bag or a small raft, both of which were filled with rocks symbolising personal belongings and weapons. Detainee denied this training was designed to simulate transporting explosives. Students at the camp were also trained on how to operate small rubber boats and were taught how to avoid detection by flipping the boat.”

How the captures worked

A number of detainees appear to have been caught in a raid on December 15, 2001, as fighters crossed over from Tora Bora into Pakistan. These prisoners were referred to as the ‘Dirty 30’ and were jailed in Peshawar. The Pakistani jail warden told them that while being interrogated, they should say that they were in Afghanistan to teach the Quran. Most of the detainees initially used this as their cover.

The detainees were transferred to Kandahar on December 26, 2001. The ISI had listed 48 Yemenis, who were captured while crossing over from Afghanistan.

Lists of hundreds of al Qaeda members were obtained from raids on al Qaeda safe houses in Karachi and Rawalpindi and from hard disk drives linked with Khalid Shaikh Mohammad. An ISI raid at a Karachi safe house on September 11, 2002, netted a document listing 324 Arabic names, aliases and nationalities and the passports of bin Laden’s family members.

Mohammad’s arrest – which his family claims was because a friend turned him in – came from a document seized in a ‘joint raid’ with the ISI. Other detainees were captured in raids and arrests in Karachi, Rawalpindi, Kohat, Bannu and Faisalabad. Karachi is notable in the documents as the landing destination for most of the detainees, who flew in from Dubai. Many of them stayed in hotels in Saddar, notably the Dubai Hotel. Detainees provided information about al Qaeda safe houses and offices in Quetta, Karachi, Lahore, Faisalabad and Peshawar, as well as facilities run by the Taliban and Harkatul Jihad al Islami.

According to one document, “in late 2001 and early 2002, a total of 195 detainees in Pakistani custody were interviewed in Peshawar and Kohat by teams composed of US interrogators.”

After Mohammad’s arrest on March 1, 2003, Ammar al Baluchi and Walid Muhammad Salih bin Attash began preparations to continue the Karachi Plot which called for simultaneous attacks on the US consulate and American targets in residential and commercial areas of Karachi. The Karachi Plot was unsuccessful due to the capture of al Baluchi and Attash while attempting to acquire explosives for the operation.

Tajikistan detainee Umar bin Hamza Abdallahyviv is reported to have moved to the Babu Camp near Peshawar in March 2001. “A foreign government service reported the Taliban and al Qaeda trained male and female suicide operatives at Babu Camp in Pakistan. Operatives were then sent to Afghanistan.”

Other plots that Guanta­namo’s detainees confessed to included the use of anthrax and biological weapons (for which Aafia Siddiqui’s advice had been enlisted), the possibility of obtaining a nuclear weapon, targets in the US and US diplomatic missions abroad and high-profile assassinations, including that of former president Pervez Musharraf.

Seventy-one Pakistanis were sent to Guantanamo, and over 60 have been transferred out. Guantanamo Bay currently houses 172 detainees.

Paracha was assessed as a significant member of al Qaeda’s international network, who provided assistance to its operations and personnel. He met with bin Laden to discuss promoting his message, and offered the use of his equipment and business. Paracha is also closely associated with Khalid Shaikh Mohammad and Ammar al Baluchi among other al Qaeda operatives.

Mohammad is believed to be the key plotter of the 9/11 attacks and headed al Qaeda’s media cell. His family members are also implicated, including cousins Abu Musab and Abu Khalid who “handle some of the most sensitive logistic and administrative matters for al Qaeda operatives based in or transiting to Pakistan”. He was reportedly waterboarded 183 times and will face trial by a military commission.

Haroon al Afghani is believed to be a senior HIG commander responsible for attacks against the US and coalition forces. He provided information on al Qaeda, as well as his role in facilitating the travel of al Qaeda members as well as transferring information and materials within Afghanistan and Pakistan.

According to WikiLeaks, the following Pakistanis were held at Guantanamo Bay. Over 60 have been transferred out. This list does not include Khalid Shaikh Mohammad.