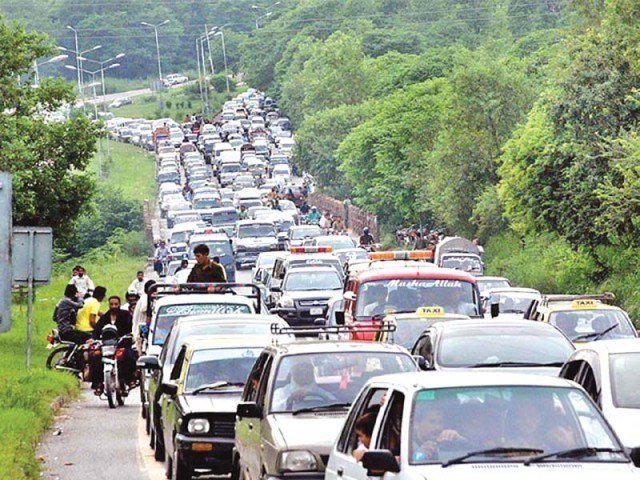 ISLAMABAD: Residents of the twin cities of Islamabad and Rawalpindi continued to suffer from a massive traffic logjam owing to a blockade by protesters at Faizabad intersection on Sunday as the government seemed to have no idea how to clear the roads.

Last week, around 2,500 supporters of the Tehreek Labbaik Ya Rasoolullah (TLYR) travelled to the capital from Lahore and camped at the Faizabad Interchange — the main junction between Islamabad and Rawalpindi. Since then, the religious group has been occupying the interchange which has resulted in practically disconnecting both cities from each other.

The protesters have erected tents on the greenbelt and deputed their own ‘security’ personnel on roads surrounding Faizabad.

The protesters have not only blocked Faizabad, they are also policing The protesters have erected tents on the greenbelt and deputed their own ‘security’ personnelthose trying to cross by frisking pedestrians and motorbike riders. They have also been controlling traffic for hundreds of meters around their protest camp, parking buses at several locations on Islamabad Highway and removing nearby police check posts.

As a result, all major roads including Seventh Avenue on Kashmir Highway, Islamabad Expressway, Murree Road and IJP Principal Road have been completely closed for traffic. Due to diversions, the alternative roads are also clogged including Kashmir Highway, Club Road, Taramri Chowk and other arteries.