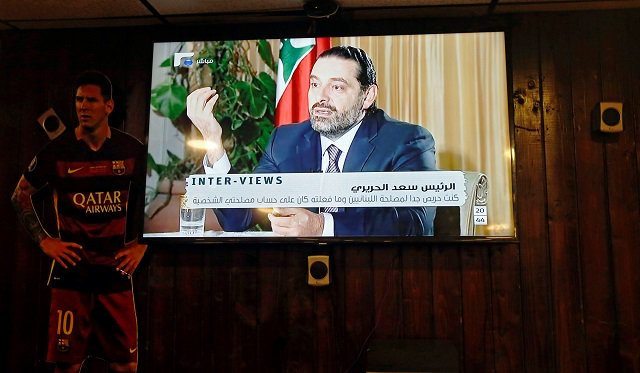 BEIRUT: Saad al-Hariri warned on Sunday Lebanon was at risk of Gulf Arab sanctions because of the Hezbollah’s regional meddling and said he would return to Lebanon within days to affirm he had resigned as the country’s prime minister.

In a television interview, the Saudi-allied Hariri held out the possibility he could yet rescind his resignation if Hezbollah agreed to stay out of regional conflicts such as Yemen, his first public comments since he read out his resignation on television from Riyadh eight days ago.

He indicated the livelihoods of hundreds of thousands of Lebanese in the Gulf could be at risk, as well as trade, vital to the stability of the Lebanese economy. Hariri said his resignation was intended as a “positive shock” to his country, which he saw in danger.

Top Lebanese government officials and senior sources close to Hariri believe Saudi Arabia coerced Hariri into resigning and has put him under effective house arrest since he flew to Saudi Arabia over a week ago. Ahead of his interview, Lebanese President Michel Aoun said Hariri’s movements were being restricted in Saudi Arabia, the first time the Lebanese authorities have publicly declared their belief that Riyadh is holding him against his will. Hariri said he was a free man.

The resignation and its aftermath have thrust Lebanon back to the forefront of the conflict between Saudi Arabia and Iran. Aoun refused to accept Hariri’s resignation unless he tendered it in person in Lebanon.

Hariri says can travel ‘tomorrow’ if he wants

Hariri, who has not returned to Lebanon since he declared his shock resignation, said he stepped down for the sake of the Lebanese national interest, repeatedly saying the country must stick by a policy of ‘disassociation’ from regional conflict.

“I am freely in the Kingdom, and if I want to travel tomorrow, I will travel,” Hariri said of his presence in Saudi Arabia. He said he would return to Lebanon within two or three days.

When he resigned on November 4, he said he feared assassination. His father, a long-serving former prime minister, was killed by a bomb in 2005.

Hariri said he must be sure his security had not been penetrated before returning. Hariri’s eyes welled up with tears at one point in the interview. Asked by the interviewer if he would take more questions, Hariri said no because he was tired.

“We know there are American sanctions (targeting Hezbollah), but (do) we add to them also Arab sanctions? What is our interest (in that) as Lebanese, because we see today interventions in Yemen and Bahrain by Iran and Hezbollah,” said Hariri.

He added: “Disassociation is the foundation of Lebanon’s interest. Where do we export our goods, is it not to the Arab states? Where do our sons work …?” “We must work to preserve this interest, and this interest was threatened, so for this reason I did what I did,” he said.

He singled out Yemen, where a Saudi-led alliance is bogged down in a war with Iran-allied Houthi rebels, asking what a Lebanese group was doing there, in reference to Hezbollah. Saudi Arabia has accused Hezbollah of a role in firing a ballistic missile from Yemen towards Riyadh earlier this month.

In order for him to go back on his resignation, Hariri said the “the diassociation (policy)” must be respected and regional interventions by Hezbollah halted. “Lebanon cannot bear them,” he said.

Hezbollah is Lebanon’s most powerful group thanks to a powerful arsenal. It has deployed fighters to Syria in support of President Bashar al-Assad. The group denies a role in the fighting in Yemen but is fiercely supportive of the Houthis in its statements.

Hariri’s resignation from abroad and the week of silence that followed has destabilised his country, where Sunni, Shi’ite, Christian and Druze factions fought a civil war from 1975-1990, often backed by rival powers around the region.

After Hariri announced his resignation, Saudi Arabia accused Lebanon of declaring war against it because of Hezbollah. The Hezbollah leader on Friday said it was Saudi Arabia that had declared war on Lebanon.

Western countries including the United States and France have reiterated their long-standing policy of support for the Lebanese government since the Saudi declaration that the Beirut government was a hostile party. Before Hariri’s interview, Aoun said Hariri’s situation in Saudi Arabia threw doubt over anything that he had said or would say, and his statements could not be considered as an expression of his full free will.

Aoun said Hariri was living in “mysterious circumstances” in Riyadh which had “reached the degree of restricting (his) freedom” and “imposing conditions on his residency and on contact with him even by members of his family”. Saudi Arabia has denied Hariri is being held against his will or that he had been forced to resign. It has advised its citizens not to visit Lebanon and those there to leave as soon as possible.