Smog forces locals onto the streets

Smog forces locals onto the streets 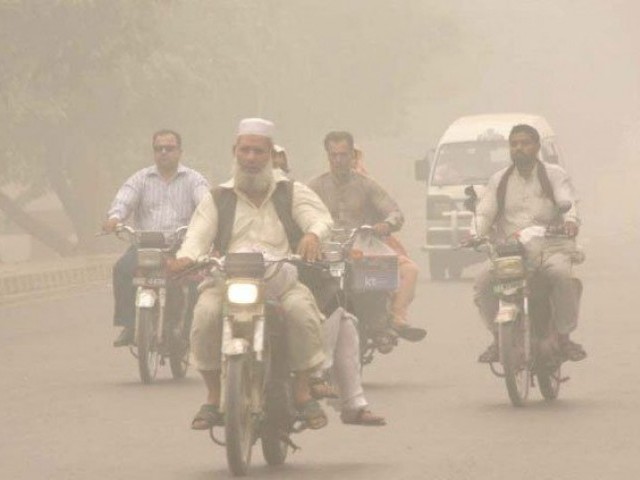 The protest, called Lahore Can’t Breathe, was held outside the Lahore Press Club on Friday. Dozens of citizens participated, wearing masks while holding banners and posters inscribed with different slogans.

The protesters chanted slogans against the government for its inability to enforce environmental regulations and its failure to take action against industries, power plants, construction contractors and waste management companies, which they claimed were responsible for pollution in Lahore.

Speaking at the gathering, protesters said the Punjab government was constitutionally mandated to serve people residing in the province and its responsibilities included protection of health and welfare.

They said that over the last two weeks, poisonous smog blanketed Lahore, the largest metropolis of the province, causing various health problems for the citizens of the city.

They urged the provincial government to declare a health emergency. The protesters also suggested steps to cope with the health hazard. They put forward seven demands to the government to deal with the prevailing smog. The demands included an immediate moratorium on coal power plants in Punjab, subsidy for renewable energy to help move away from polluting sources and an immediate ban on waste burning.

Other demands included incentives to small farmers to use agro-ecological methods for compositing crop stubble, immediate and indiscriminate enforcement of environmental regulations on industries and immediate enforcement of dust control measures at all construction sites. The protesters also urged the government to finalise and implement an ecologically sustainable urban transport plan, which should involve both removing vehicles from roads and provide clean and affordable transportation to the public with adequate connections across the city. The last demand of the protesters was that the government curb tree cutting in the city and engage the public in mass tree plantation projects using local and low-water consuming species.

On Thursday, the Punjab Environment Protection Department claimed the smog had all but left most of the province.

However, several districts of the province were reportedly still enveloped by smog. At the same time, independent sources have refused to verify the claims made by the EPD.

Director Monitoring Lab and Implementation (ML&I) Tauqeer Ahmad Qureshi said that the smog has dissipated for this year. The Punjab government took aggressive measures to bring down the level of pollution in the entire province.

Sharing details of the measures, he said that 175 pollution causing units have been sealed and 22 FIRs registered. A ban was also imposed on burning of rice stubble. About 151 FIRs were registered against violators and 43 people were arrested. Similarly, around 15,718 vehicles causing pollution were challaned and 1,170 vehicles impounded. For controlling fugitive dust, 13 sites were issued notices and eight were closed for non-compliance.

He said six units were currently installed in Lahore. The above-mentioned measures improved the air quality in the city, he added. “This clearing of smog from Punjab was a natural phenomenon. We will continue taking these aggressive measures to prevent smog next year.” Qureshi said that November 5 was the worst day of the smog spell.

A case of motherhood and emotions