International Conference at KU: Promotion of tolerance in society through dialogue stressed

International Conference at KU: Promotion of tolerance in society through dialogue stressed 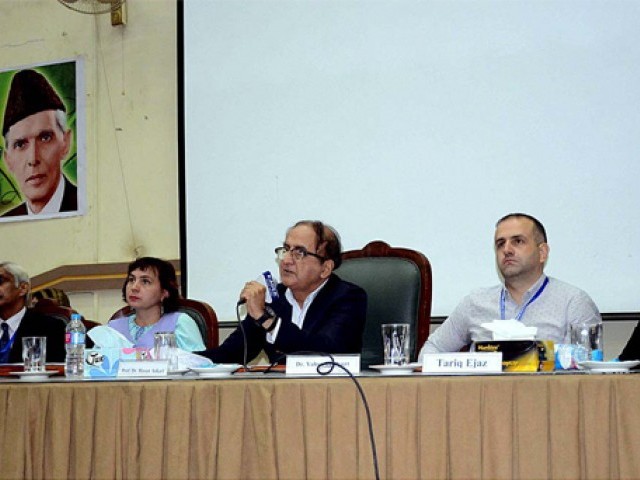 Dr Hasan Askari Rizvi delivering the keynote address at the inauguration ceremony of an international conference at University of Karachi. PHOTO: APP

Religious and cultural extremism was promoted in Pakistan in the 1980s due to vested interests of rulers and global powers. Due to extremism, Pakistani society has lost cultural and religious tolerance to a large extent and is not willing to politically accommodate diverse groups.

Punjab University Professor Emeritus Dr Hasan Askari Rizvi said this on Tuesday while delivering the keynote address at the inauguration ceremony of an international conference, ‘Diversity and Peace: Challenges to Social Discourse’, organised by University of Karachi (KU) Faculty of Social Sciences at the KU Arts Auditorium.

It is the need of the hour to promote a culture of tolerance and harmony through dialogue, Dr Rizvi said, adding that individuals should build bridges through positive interaction and mutual sharing rather than barriers that create distrust and conflict.

“Academicians and intellectuals have [to play] a leading role in encouraging dialogue among different sections of society. This is essential to accommodate diversity and emphasise pluralism,” Dr Rizvi asserted. The scholar was of the view that lately the state had also realised that society needed tolerance to progress. “Currently, there has been a realisation of what has gone wrong with Pakistan,” he said, adding that the state’s efforts for the promotion of dialogue between diverse groups is commendable.

KU Vice-Chancellor (VC) Prof Dr Muhammad Ajmal Khan welcomed the foreign and local scholars who were participating in the conference. Social sciences have gained significant importance in the backdrop of political, social and economic events taking place in the world, he said, adding that changes which happen in one area of the world are no longer contained by political, physical or natural boundaries.

Our educational system has yet to move in the right direction for which our varsities should become centres of dialogue, the VC said.

While presenting their paper in the conference, KU Faculty of Social Sciences Dean Dr Muhammad Ahmed Qadri and Dr Xiaoqing Xie from University of Geosciences said the establishment of China-Pakistan Economic Corridor (CPEC) reflected the strategic and cooperative partnership between the two countries. CPEC and One Belt One Road construction are closely linked, they said, adding that the projects will result in increase in economic growth and employment in Pakistan and help the country in getting rid of energy shortage.

Dr Olena Bordilovska from Taras Shevchenko National University of Kyiv, Ukraine said for the last 26 years, Ukraine has been striving for nation building on the basis of cultural diversity, social harmony and economic prosperity.

Paulina Fecht from University of Heidelberg, Germany, while presenting her research paper, said that post-Second World War era saw the trend of reconciliation in the European states which was unprecedented in the past due to power politics. Franco-German peace process is a classic example of the post-Second World War period that ended up centuries old rivalry between the two states and brought peace and stability in the region. Hostile relations between India and Pakistan are not centuries old but the clash of ideologies between the two newly born states has led the region towards race for nuclear arms, she said, adding that India and Pakistan should learn from Franco-German reconciliation model.

Dr. Yahya Yesilyurt from Kastamonu University, Turkey, said that due to Turkey’s geographical location, it will have to play the role of a coordinator between Asia and Europe. Regions become powerful through dialogue and peace, the scholar said.

Sindh Assembly: Opposition protests for not being allowed to speak on sugar cane crushing