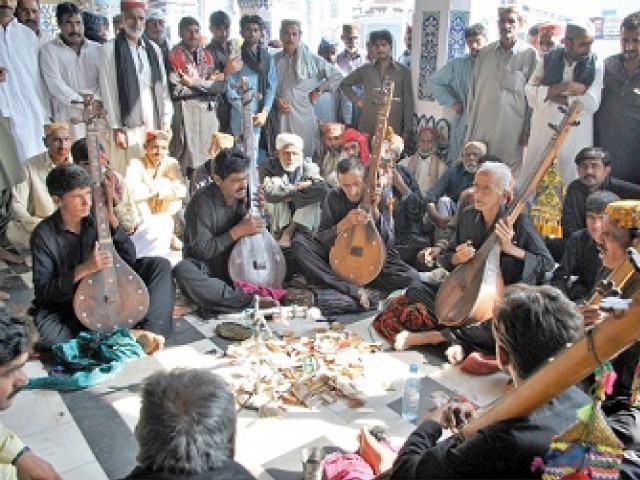 HYDERABAD: With conspicuous fervour of devotees and flavours of the sufi event, the 274th urs celebration of Hazrat Shah Abdul Latif Bhitai commenced in Bhit Shah, Matiari district on Saturday. Thousands of people will visit the small town along the National Highway, some 50 kilometres off Hyderabad, during the three-day celebrations featuring prayers, music, exhibition, cattle shows, sports and literary events.

One of the new attractions at the festival was a 16-foot statue of Bhitai depicting the saint wearing a turban and playing dambur  – a five-stringed musical instrument which he modified in the 18th century from the central Asia’s tambur. It has been temporarily placed at Bhit Shah’s official guest house, where Sindh Culture, Tourism and Antiquities Minister Sardar Ali Shah and custodian of Bhitai’s shrine Syed Waqar Hussain Shah inaugurated the sculpture on Saturday.

The statue will later be relocated to the centre of the Qarar Lake. Assistant professor Nadir Ali Jamali of Sindh University’s institute of art and design took 10 months to complete this piece of art which has been coloured in a monotone whitish hue.

“I feel honoured to be at a place where the message of peace, love, pluralism and religious harmony was spread,” said the culture minister. Referring to Bhitai’s poetry and its cherished universality, Sardar said that even after 274 years of his death, the sufi poet’s popularity is spreading globally, with many scholars conducting research on his poetry and music.

And in between, lies the door

Sindh’s acting governor Agha Siraj Durrani officially inaugurated the urs by laying a chaddar and offering fateha at the shrine. He, accompanied by provincial ministers and officials, later attended the rendition of Bhitai’s poetry and music in the shrine’s courtyard in a performance by a choir. Durrani later inaugurated the cultural village and agricultural exhibition.

A musical night will be held on each of the three days of the urs celebrations. An international literature conference, a conference of folk, traditional wrestling, horse racing and cattle shows, among other activities, are being organised to provide a range of entertainment to visitors.

The 274th urs is the second largest sufi saint festival to be held in Sindh since the February 16 suicide blast at the shrine of Hazrat Lal Shahbaz Qalandar. According to the district administration, some 2,500 personnel under supervision of 17 deputy superintendents of police and 100 Rangers have been deployed in the town.

As many as 32 closed circuit television cameras have been installed for surveillance while six walk through gates have been placed at the shrine’s entrance. The bomb disposal squad, fire brigade and ambulances have also been stationed in the town.

Sardar said that strict security measures have been put in place and gave reference of the United States where despite hi-tech security terrorist activities take place. “Terrorism and extremism have become a global problem,” he added.