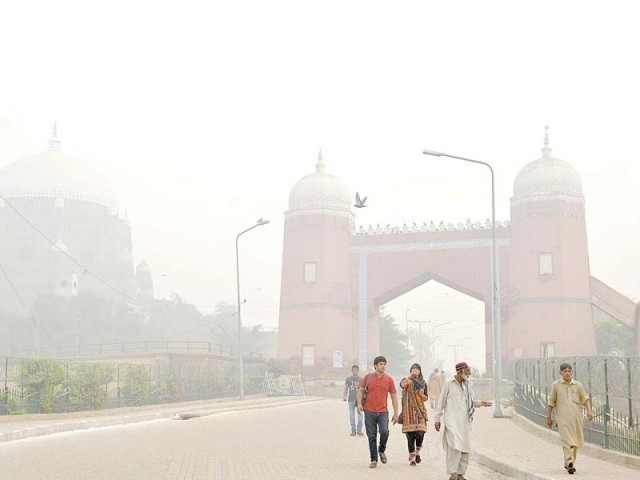 MULTAN: South Punjab is in grip of severe smog due to maximum variations in temperature. Cities, including Multan, Vehari, Khanewal, Muzaffargarh, Rajanpur and Layyah have been affected by smog for the last two days.

The smog comprising nitrogen oxide, carbon monoxide, sulphur and other aerosols is causing health issues for the citizens who have been complaining about breathing problems, eye infections and minimum visibility on roads. According to the Meteorological department, the smog will persist for one more day.

Urban areas of Multan are badly affected by smog due to release of smoke from the factories.

The district government has taken special measures for the safety of the citizens and a special cleanliness drive was launched across the city in this regard.

Solid Waste Management manager operations told The Express Tribune that roads had been washed with water to avoid smog-related diseases. He directed the supervisory staff to ensure spraying of water on roads four times a day.

Meanwhile, primary and secondary healthcare department has directed the officials to display health instructions in all district headquarter hospitals. Banners, steamers and guidelines have been displayed on all important points for the guidance of citizens. 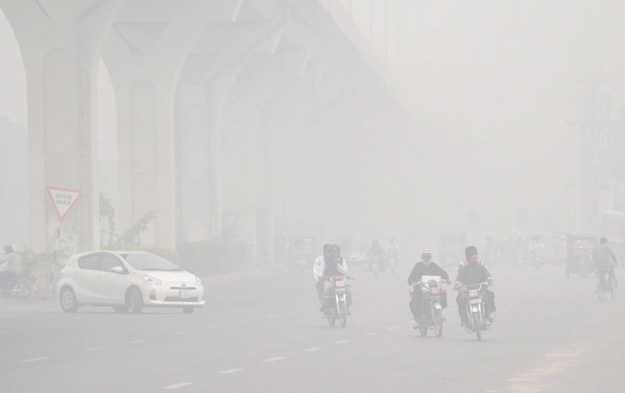 In Vehari District, people are suffering from respiratory problems and skin irritation.

Meteorological Department Deputy Director Zawwar Hussain said, “Smog is caused by difference between temperature at day and night time. When temperature is high at day and low at night smog builds up,” he said.

The deputy director maintained the intensity of heat in day time would reduce gradually and weather would be clear by next week.

Zawwar Hussain observed that there were no chances of rain in next 15 days. He, however, predicted that fog would appear in December and January and temperatures would dip to one or two degrees centigrade. He said that Pakistan was affected by this phenomenon because of its location.

Meanwhile, doctors urged the citizens to take special care as smog could cause symptoms of flu, throat and fever irritation. They stressed the need to take precautionary measures, especially during outdoor movement.

They said that citizens should cover the mouth with mask and use glasses to avoid health problems.

Earlier, environmentalists said fumes from cars, burning of trash and smoke from industries, are some of the sources of pollution, which cause smog when coupled with dry and cold weather.

They said it was unfortunate that the government failed to come up with a strategy to combat air pollution, despite it being harmful for both humans and animals, especially for cattle, to inhale smog.

Pakistan Meteorological department (PMD) chief Dr Ghulam Rasul told The Express Tribune that the foggy season had arrived in Pakistan well before its time, and that smog was expected to follow soon.

He added that smog would be treated as an unusual, extreme weather event, adding that although the problem was not new, smog was never discussed in the past due to the lack of awareness.

“The dry spell is a result of climate change, which adds to the issue of smog. However, owing to the PMD’s lack of equipment for measuring pollutants in the air, you cannot predict smog patterns before time,” Rasul said.

He elaborated that Pakistan’s dry spell that started in September would continue till next year. “PMD has warned relevant authorities about the dry spell while also advising them to properly utilise the existing water resources in the country,” he said.

Last year, during November, Lahore and its cousin cities in India, were very smoggy due to the excessive burning of crops in Indian Punjab, according to the National Aeronautics and Space Administration (NASA). People in the heavily smog-infested areas developed lung, throat and eye infections.