China crowns Xi with name once reserved for Mao Zedong

China crowns Xi with name once reserved for Mao Zedong

After the 19th party congre­ss ended, Xi was formal­ly handed a second term as its leader­
By AFP
Published: October 30, 2017
Tweet Email 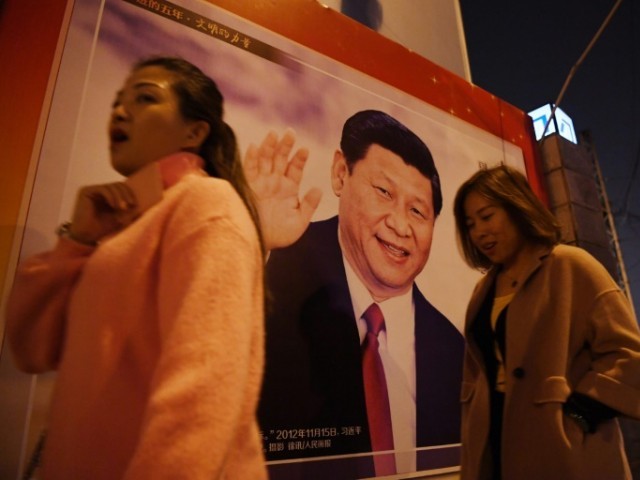 A roadside poster of Xi Jinping: now he has a new honorific, PHOTO:AFP

BEIJING: China’s ruling Communist Party has dusted off a Mao-era honorific for President Xi Jinping, cementing his status as the most powerful ruler since the Great Helmsman himself.

The term “lingxiu” has more reverential and spiritual connotations than the ordinary term for leader, and has not been used since the time of Mao’s successor Hua Guofeng.

But it has begun to pop up again in state media and in government meetings. After the 19th party congress ended last Tuesday, Xi was formally handed a second term as its leader.

With no clear successor emerging in a revamped ruling council, known as the Politburo Standing Committee, he could dominate the nation for decades to come.

Xi’s eponymous ideology was enshrined in the party’s constitution — a honour not given to his two predecessors Jiang Zemin and Hu Jintao, whose contributions remain anonymous.

China’s historic achievements since the 18th party congress were “most importantly and most fundamentally thanks to our ‘lingxiu’ and core Xi Jinping navigating and steering the way,” the state-run Henan Daily said Monday.

“General Secretary Xi Jinping is the party’s fully worthy ‘lingxiu’, supported by the whole party and loved and esteemed by the people,” the Politburo concluded Friday at its first meeting since the unveiling of the new leadership line-up.

For decades China has been governed in an ostensibly collective fashion by the seven-person Standing Committee. But since Xi took the reins in 2012, power has been increasingly centralised in a sole pair of hands: his.

Mao, at the height of his personality cult during the early years of the 1966-76 Cultural Revolution, was hailed as a “great teacher, great lingxiu, great commander-in-chief, and great helmsman” — a slogan known as the “four greats”.