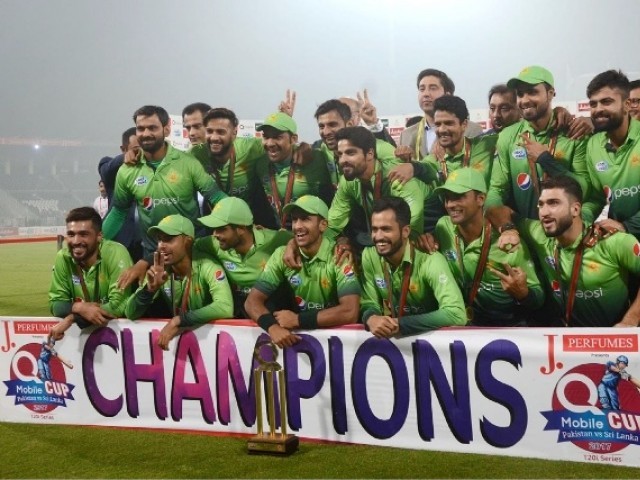 The victorious Pakistan team posing with the cup

Eight years after a terrorist attack on them drew the curtain on international cricket in Pakistan, the chivalrous Sri Lankans returned to Lahore on Sunday to demonstrate the country’s credentials to host international events in a secure environment while at the same time entertaining the fun-starved crowd. Team Pakistan made the occasion all the more enjoyable by completing the whitewash of the T20I series with a 36-run victory.

“Since we have experienced more than 30 years of war, we know what isolation means,” Sri Lanka Cricket’s President Thilanga Sumathipala said as Pakistanis celebrated the return of the sport to the country as well as the restoration of peace and security after rendering numerous sacrifices in the war against terrorism.  “You deserve regular good cricket being played in your country,” Sumathipala said.

Final T20: Cricket in the air amid traffic woes

“This journey began with the arrival of Zimbabwe, followed by the PSL final, then the World XI’s visit and now Sri Lanka,” Pakistan Cricket Board Chairman Najam Sethi said at a media briefing prior to the start of the game at the Gaddafi Stadium.

Veteran all-rounder Shoaib Malik scored an inspirational half-century to help Pakistan win the match. After being put into bat first on a historic day, after 15 overs of the innings, the Men in Green were in need of a real push to post more than a respectable total on the board.

Malik, who had a difficult outing in the previous match in the United Arab Emirates, stood up and scored breathtaking 51 off just 24 balls with the help of five fours and two maximums to help Pakistan post 180 for the loss of three wickets in the 20 overs.

Chasing 181 to register their first victory of the series, Islanders had the worst start possible as they lost first three wickets for just 21 runs in 3.4 overs.

Young Dasun Shanaka tried to stabilise the ship with a quick-fire half-century, but it was not going to be enough as the visitors only managed to score 144 for the loss of nine wickets in their 20 overs.

For Pakistan, pacer Mohammad Amir was the pick of the bowlers as he claimed four, whereas all-rounder Faheem Ashraf picked two wickets.

“This is something we’ve missed for so many years,” he said about playing in front of the home crowd.

Pakistan skipper Sarfraz Ahmed said it was quite special to play in front of the home crowd, “The kind of support we get, the people that come, it gives us a lot of happiness.”

Talking about the team’s performance, Sarfraz said, “The way our players are performing in crucial situations, it’s good. The best thing is we are doing it in our country, in front of our fans. Our target was to play Faheem up as soon as we could.”

The skipper also thanked the Sri Lankan team for coming for the tour. “I’d like to thank the Sri Lanka team. The way our law enforcement have done their job, it will open doors for us, even to play a Test series.”

Meanwhile, Thisara Perera, the Sri Lankan stand-in captain for the match, said the tour was quite tough for his team.  However, he thanked the Pakistani fans.  “For Pakistan fans, thanks for inviting us. My teammates gelled like a family,” he said.