Three cargo jets have been destro­yed and four pilots have been killed since 2006 in flight fires
By News Desk
Published: October 20, 2017
Tweet Email 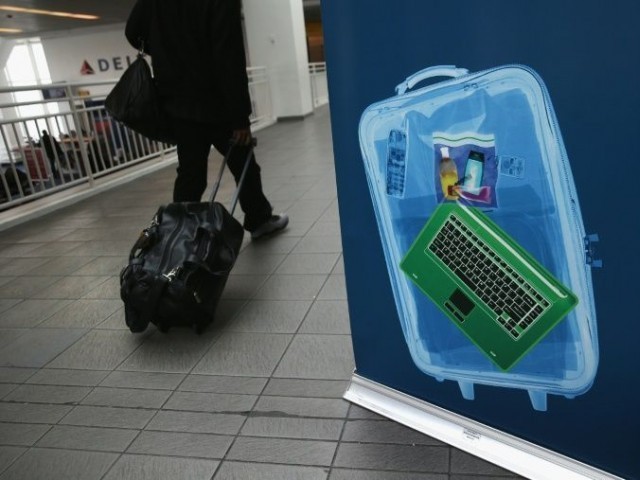 The world airline community is being pressed by the US government to ban large electronic devices such as laptops from being checked in as luggage because of a potential fire risk.

“Tests show that when a laptop’s rechargeable lithium-ion battery overheats in close proximity to an aerosol spray can, it can cause an explosion capable of disabling an airliner’s fire suppression system. The fire could then rage unchecked, leading to the loss of the aircraft,” said the Federal Aviation Administration in a paper filed with the UN agency.

The international Civil Aviation Organisation is responsible for setting global aviation standards. This proposed ban is on their agenda during their panel’s meeting on dangerous goods in Montreal this week.

Ten tests were conducted by FAA which involved a fully charged laptop packed in a suitcase which was placed against the heater in order to rise the battery’s temperature.

In another test, a can of dry shampoo with eight ounces of aerosol was strapped to the laptop which caught fire immediately. The test proved that Halon gas fire suppressant systems that are used by airlines would be unable to put out the fire, according to the FAA. However, the explosion will only be strong enough to destroy the cargo department and not the whole plane.

“The European Safety Agency, the FAA’s counterpart in Europe; Airbus, one of the world’s largest makers of passenger airliners; the International Federation of Airline Pilots’ Association, and the International Coordinating Council of Aerospace Industries Association, which represents aircraft makers, concurred in the recommendation,” the paper further elaborated.

However, the paper does not address if the ban should be extended to domestic flights or not.

“It believes most devices larger than a smartphone are already being carried by passengers into the cabin, rather than put in checked bags,” said the FAA.

Three cargo jets have been destroyed and four pilots have been killed since 2006 by in-flight fires which according to investigators were started by batteries.

Thief in a suitcase robs bus baggage in Paris

The US imposed a ban on laptops earlier this year from 10 Middle Eastern airports citing security reasons but the ban was lifted in July though.

“Transportation Secretary Elaine Chao has now decided to put PHMSA back in charge at future ICAO dangerous goods deliberations,” said Republican Peter DeFazio, “I strongly believe it has the potential to put the lives of airline passengers and crews at serious risk.”

Previously, lobbyists for lithium battery makers have urged the change.