The gender parity index for unempl­oyment was higher for rural areas at 0.607 compar­ed to urban areas with 0.483
By Mariam Shafqat
Published: October 19, 2017
Tweet Email 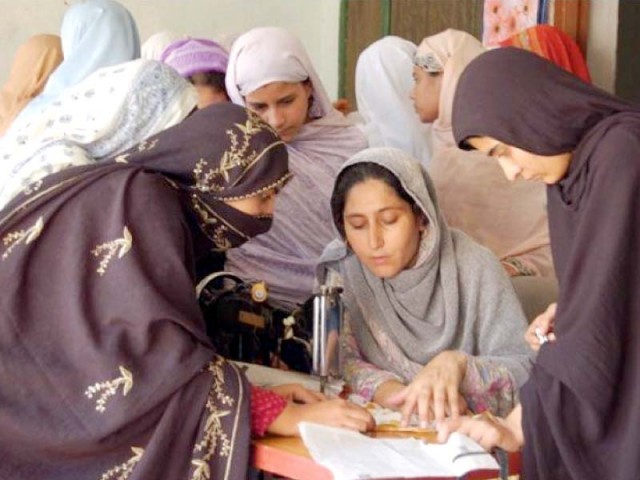 These figures were made public in the recently released Punjab Gender Disparity Report by the Punjab Commission on the Status of Women.

Data revealed that women’s participation in economic activities of Punjab had remained low since 2014-15. The Female Labour Force Participation Rate was only 27.8% as compared to 69.4% for males.

The share of female proprietors in both small-scale industries and cottage industries stood at 4.2% and 2.59%, respectively, which was significantly low.

According to the report that took its data from a Pakistan Bureau of Statistics survey in 2014-15, women formed almost 38% of the unemployed people in rural areas and 32.5% in urban centres. 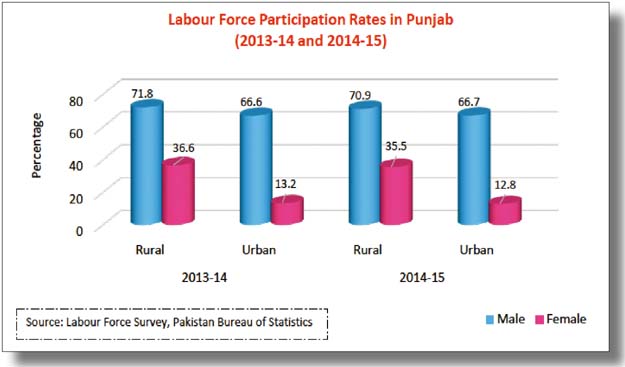 The gender parity index for unemployment was higher for rural areas at 0.607, compared to 0.483 for urban ones.

Further data revealed that significant disparities existed between male and female wages across major industries of Punjab. Almost 75% of the female labour force earned below the minimum wage of Rs14,000 compared to 43% of the male labour force.

The high numbers of women, 50.9%, involved in piece rate work led to increased vulnerability of the female labour force. That was due to the uncertainty associated with the piece rate remuneration system.

The category of the ownership patterns of land, vehicle and financial instruments also revealed significant disparities across Punjab. As per the data, there were 49.8 million agricultural landowners in the province, out of which 34.9 million (70%) were men and just 14.9 million (30%) were women. 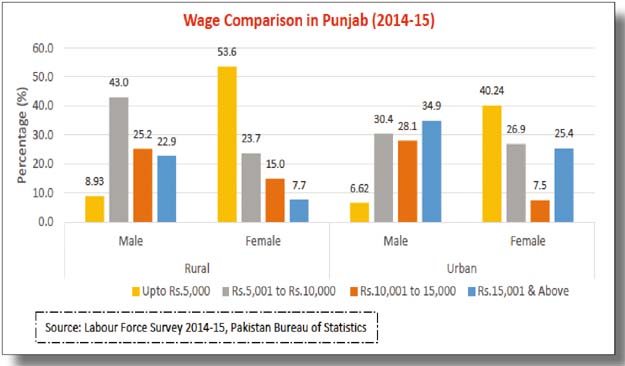 According to the report, under vision 2025, the government had committed to increasing the female Labour Force Participation Rate (LFPR) to 45%. Achieving this goal, however, would require both the federal and provincial governments to take immediate and definitive measures to increase the current female LFPR, which was an alarming 22% as compared to the male LFPR of 67.8%.

According to the report, the low female labour force participation rate was a result of significant social and economic barriers faced by females.

The report stated that women’s role in society was generally limited to household activities, childbearing and upbringing. It added this hindered their participation in the formal labour force.

Investing in the human (or individual) potential of women, who constituted more than half of the world’s population, was the key to achieving economic growth as well as greater financial and social returns.  Empowering women also resulted in reducing fertility rates; lower infant and child mortality rates, while ensuring greater participation in socioeconomic decision-making.