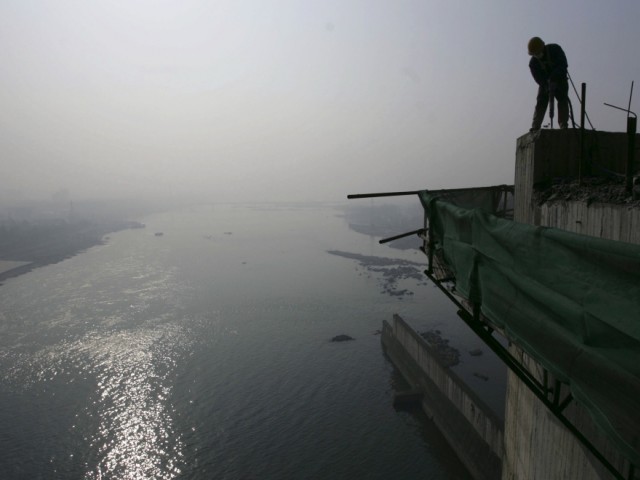 A labourer works on a reservoir. PHOTO: REUTERS

MUZAFFARABAD / ISLAMABAD: The strategically important 969-megawatt Neelum-Jhelum Hydropower Project achieved a major milestone as water filling in the reservoir began on Tuesday following completion of substantial work on the dam.

The Neelum-Jhelum Hydropower Project is being constructed on Neelum River in Azad Jammu and Kashmir (AJK). The project is an engineering marvel with 90% being underground in high mountainous areas.

Jhelum hydropower project: Excavation of tunnels to be complete by April

The project consists of four units with installed capacity of 242.25MW each. First unit is scheduled to come online by the end of February 2018 followed by the second unit in mid-March and third and fourth units in April.

“Almost 96% of work has been completed and finishing touches to be given within two days,” Neelum-Jhelum Hydropower Project Chief Engineer Nayyar Allauddin said.

Briefing journalist, he said, “All the civil work including tunnel boring, installation of generators and turbines have been completed and we are prepared to fill the dam to put it on test within two days.”

On its completion, the project will contribute about five billion units of electricity to the national grid annually. Annual revenue of the project is estimated at Rs50 billion. The project has entered its final stage with the completion of dam structure across the Neelum River. The dam is 160-metre-long and 60-metre-high. Its storage capacity is 8,207 acre feet of water.

The filling of the reservoir, which will take about a month, will not affect water requirements downstream of the dam. As much as 15 cusecs of water will always be released downstream to cater to population needs and sustain aquatic ecosystem dependent on the Neelum River.

Neelum-Jhelum hydropower project will be operational next year: WAPDA chairman

Highlighting salient features of the project, Allauddin said the dam had been constructed underground at intake point Nauseri and had the capacity to store 10 million cubic feet of water.

Completed at a cost of Rs404.321 billion, revenues from the supply of 5.5 billion units of electricity annually at a cost of approximately Rs7 per unit will be spent on the repayment of loans acquired to meet the cost of the project.

The project official said the project would be run by Neelum-Jhelum Hydropower Company with AJK chief secretary being one of the members of its board of directors.

An agreement between the AJK government and Wapda had yet to be inked as it was under consideration of the ministry, Allauddin said. Allauddin, who is also the project director, said clauses of the agreement had been approved by the AJK government and Neelum-Jhelum Hydropower Company was working within the framework of the draft agreement as far as construction and implementation were concerned.

He rejected the impression that after diversion of the river, Muzaffarabad and adjoining areas would face environmental hazards and cited a number of environmental mitigation measures taken to address concerns.

A sum of Rs5.56 billion has been allocated in PC-I of Neelum-Jhelum Hydropower Project including water supply schemes for Muzaffarabad, Chattar Kalas and Komi Kot in addition to a number of other such schemes, which will be undertaken by the government of AJ&K.