DG ISPR ‘disappointed’ by Ahsan’s statement, ‘stands by’ his comments

DG ISPR ‘disappointed’ by Ahsan’s statement, ‘stands by’ his comments 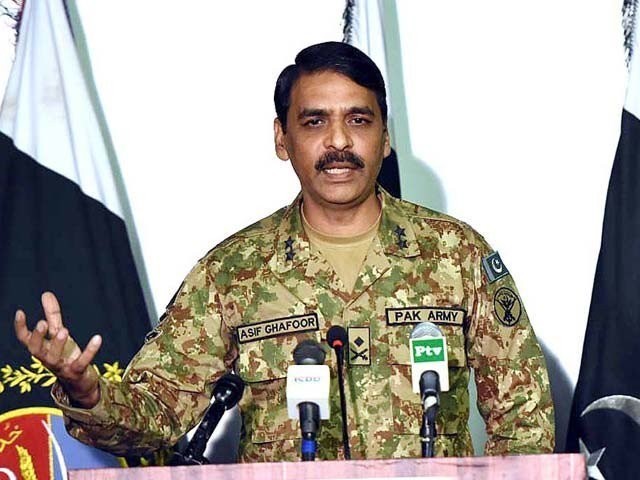 ISLAMABAD: Democracy in the country faces no threat from the Pakistan Army but from the unfulfillment of the requirements of democracy and not coming up to the expectations of the people, military spokesman Major General Asif Ghafoor said on Saturday.

Maj-Gen Ghafoor, the Director General of Inter-Services Public Relations (ISPR), told a press conference that the country needed stability to move forward and emphasised that the government and the established democratic system needed to continue.

“I have to say this because there are a lot of rumours about martial law and [the installation of a] technocratic government,” he said. “Democracy could only face threat if its requirements are not met and people’s aspirations [are not] fulfilled,” he added.

The ISPR chief said all the decisions at the national level were the prerogative of the prime minister. “There is civilian supremacy in the country and the chiefs of Pakistan’s armed forces are being appointed by the civilian government,” he added.

About his statement on the state of country’s economy and a strong reaction from Interior Minister Ahsan Iqbal, he said there were two elements of the minister’s statement – one that it was an irresponsible statement and that only the enemies of Pakistan could talk like that.

“On this I was disappointed as a soldier and as a citizen of Pakistan” he said, explaining that the context of his statement was a seminar on economy in Karachi in which well-known economists and opinion-makers were invited and Amy Chief General Qamar Javed Bajwa was the keynote speaker.

He also played the recording of a private TV show. “I never said we are not doing anything to improve our economy. You may see all my statements,” he said. “I never said that it is only the armed forces that are working. No institution can work in seclusion. There will be ups and downs and I said a lot of work has been done and lot more needs to be done”, he added.

The spokesman emphasised that security and economy were closely linked. “When people interacted with the army chief after that seminar [on Wednesday] he urged them to play their role in improving economy and pay taxes,” he said.

Maj-Gen Ghafoor pointed out that in the last year, there were hardly 39% recoveries of taxes on the notices the government had served. Out of the 39% recoveries, 95% were indirect taxes, and of the 5% direct taxes, 60% were tax deductions from the salaries of government employees, he said.

“I don’t think I had said anything [negative]. I stand by my words,” he said. “Our basic purpose of this seminar was to sit together and see if [we] have to improve our economy… what role security should [we] play for that and how economy can fulfil security needs.”

The ISPR chief ruled out any joint military operation on the Pakistan soil – a proposal made by Foreign Minister Khawaja Asif during his recent US visit. “There is no concept of joint operation on Pakistani soil, full stop,” he said.

“There had never been and there will be no [such] operation of Pakistani forces with any force of the world,” he said, adding that he had already clarified this issue before – though not with reference to the foreign minister’s statement but in general terms.

Maj-Gen Ghafoor expressed Pakistan’s readiness for cooperation with the US on security front which is “trust-based” and for the common objective. The army chief had started a policy of engagement with the US, he said. “We have security cooperation [with US] and it will continue to improve.”

On former ISI chief Lieutenant General Rizwan Akhtar’s premature retirement and the rumours spreading on social media, he said the general was taking the retirement due to some personal compulsions.

When asked about reports of shifting of Taliban political office from Doha to the UAE, he said Foreign Office might be approached for the comments because the matter did not fall in his domain.

At the press conference Maj-Gen Ghafoor also narrated how the military rescued the Canadian-American family from their kidnappers this week.