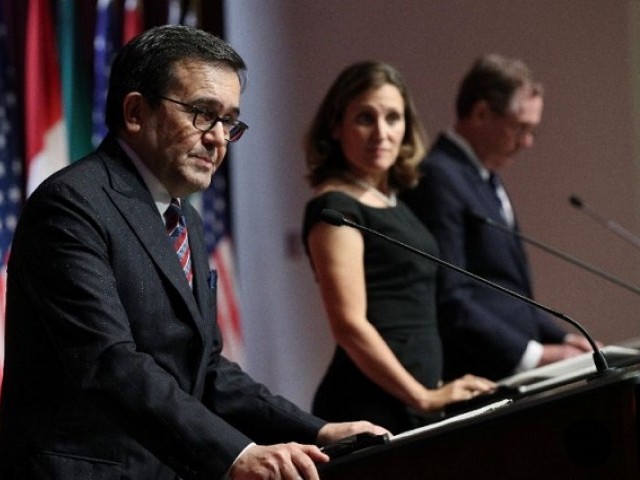 MEXICO CITY: The leaders of Canada and Mexico stuck to their upbeat view on the future of the North American Free Trade Agreement on Thursday, despite US President Donald Trump’s threats to axe it.

Visiting Mexico on the heels of a tense trip to Washington, Canadian Prime Minister Justin Trudeau downplayed Trump’s attacks on NAFTA as part and parcel of the negotiations on updating the 23-year-old accord.

“We will not be walking away from the table based on proposals put forward,” he said when asked about the Trump administration’s push to include a “sunset clause” requiring the three member countries to unanimously renew the deal every five years.

“We will discuss those proposals, we will counter those proposals and we will take seriously these negotiations,” he told a press conference at the presidential palace after being welcomed with military honors. Speaking alongside him, Mexican President Enrique Pena Nieto insisted the deal remained vital to the region’s economies, despite Trump’s repeated NAFTA bashing. But he said Mexico would not be pushed around.

“Mexico is betting on achieving a good agreement. But it will have to be a positive agreement, and good for all three sides, not just one. We won’t be hostage to a single point of view,” he said.

The comments came as negotiators from the three countries meet in the United States for their latest round of what Trump vowed would be tough talks on a new version of NAFTA. Trump has put both Mexico and Canada on the defensive over trade, accusing the former of taking American jobs and the latter of unfair subsidies, and wants to either overhaul or ‘terminate’ NAFTA. His administration has land-mined the renegotiation he triggered with controversial proposals, including tightening the “rules of origin” to demand certain amounts of American-made content in products, scrapping NAFTA’s dispute resolution mechanism and the “sunset clause.”

Trump slams NAFTA as a ‘catastrophe’

Trade was a touchy subject during Trudeau’s visit to Washington, after the US slapped a 220 percent retaliatory duty on Canadian planemaker Bombardier’s CS100 and CS300 aircraft over dumping allegations. Trudeau in turn threatened to cancel a purchase of 18 fighter jets from American aerospace giant Boeing, saying he had told Trump he “disagreed vehemently” with the US decision.

Making his first official visit to Mexico, the prime minister appeared to be looking for a friendly ear in Pena Nieto, himself no stranger to hostility from the Trump administration. Despite their common ground, however, Canada and Mexico are also at odds on some key issues.

Canada, which shares Washington’s concern over competition from cheap Mexican labor, is notably pushing for Mexico to improve workers’ wages under the new NAFTA – something the Pena Nieto administration says should be determined by the market, not dictated by a trade deal.

Pena Nieto sought to send a message that Mexico and Canada are better off working together as they forge ahead in the delicate negotiations with the giant and sometimes grumpy neighbor they both share.

“Canada and Mexico are going through one of the best moments of our relationship,” he wrote in an op-ed published in Canadian newspaper The Globe and Mail.

“The government of Mexico will keep working constructively with Canada to further strengthen our relations, achieve mutual benefits and contribute to reaching our shared goal: to make North America the most prosperous and competitive region in the world.”

On Friday, Trudeau will wrap up his North American tour with a speech to the Mexican senate, whose approval is needed to ratify any renegotiated version of NAFTA. Mexico and Canada do some $20 billion a year in bilateral trade.

The figure is dwarfed by their trade with the US: more than $480 billion last year for Mexico and more than $540 billion for Canada.