But time is agains­t them
By AFP
Published: October 8, 2017
Tweet Email 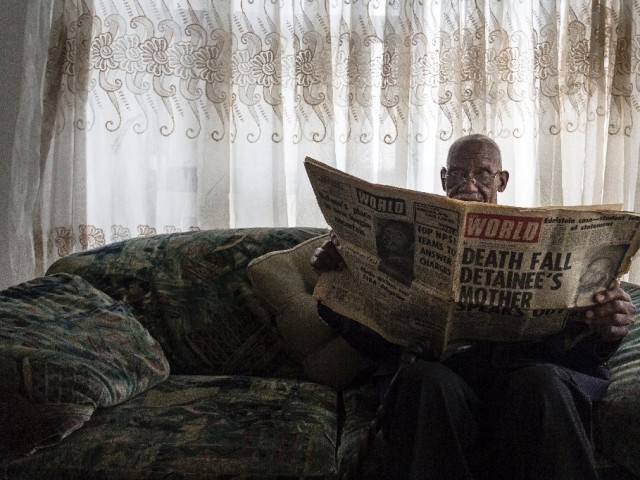 Phillip Mabelane, paging through a newspaper from the period, has been battling for 40 years for an investigation into the truth behind his son's 1977 death under apartheid. PHOTO: AFP

Time is running out for 95-year-old Phillip Mabelane. For 40 years he has waited to discover the truth of how his son died at the hands of police during South Africa’s apartheid era.

Now the reopening of a similar case has given him hope that he may finally learn what really happened.

In February 1977, Mabelane heard that a detainee had died in unusual circumstances. “I heard the news report that a detainee jumped from the 10th floor” of Johannesburg police headquarters, he told AFP, his back upright, his head shaven, sporting a white goatee.

A few hours later, two policeman were hammering on the door of his modest Soweto home. The victim was his 23-year-old son Matthews, an anti-apartheid activist who had been arrested two weeks earlier as he crossed the Botswana border.

Since then, Phillip has been haunted by a single question: “How can someone jump from the 10th floor when you have done nothing bad?”

“Matthews loved life, he loved jazz, he loved music, he loved girls, he was a socialite. He could not have committed suicide,” said Lasch, 63, his brother. “Matthews was pushed.”

The Mabelanes never believed the official version which exonerated the police, as in all similar incidents of the era.

Between 1963 and 1990, human rights activists say 73 people died in police detention, sometimes in circumstances strikingly similar to those of Matthews’ case – for example Ahmed Timol.

In 1971, fellow activist Timol also plunged to his death from the 10th storey of the same police station. This year, after battling for years, Timol’s family convinced prosecutors to re-open the inquest into the death – a legal first in South Africa.

The court probing the case will deliver its long-awaited verdict on October 12. The result could set an important precedent for other South African families whose loved ones also fell victim to the brutal apartheid system but, like the Mabelanes, have been denied the truth. In the Timol case, witnesses described in detail to a Pretoria court the extreme violence meted out against opponents of the regime.

Torture at police headquarters included electric shocks, testicles crushed “like pepper” and jaws and skulls fractured by savage beatings. Lasch listened attentively to the hearings from the public gallery, stunned by what he heard.

“There was a modus operandi” among the police, he said. “The Timol inquest gave us hope… We never thought that it would happen, that the truth would come to the surface.”

Since then, the family have pressed on with efforts to secure a proper investigation of Matthews’ death – despite their modest means.

Among their leads is a UN report from 1979 of which two-and-a-half pages deal with Matthews’ death. The document quotes the police inquiry into the death which claimed that Matthews “forced the window open” and climbed on to a ledge.

“The police were unable to stop him but called to him to come back… he lost his balance and fell to his death,” the police investigation said.
But the UN found that “it would be absurd to suggest that he attempted to escape through a window of the 10th floor”.

“There is a strong, and in the circumstances irresistible, inference that he was forced to climb out of the window because he was being tortured,” said the official UN conclusion.

Matthews’ corpse was never subject to an autopsy, but when the Mabelanes retrieved his body they discovered his blood-soaked trousers contained a disturbing message, Lasch said.

“Brother Lasch, tell mother and my other brothers that the police will push me from the 10th floor. I bid you farewell,” said the message written in the garment’s lining.

In their despair and in fear of the apartheid system, the family did not hold on to the trousers. “Nobody could think that today, 40 years down the line, we could ever think of going to court and request an inquest to be opened,” Lasch said. “I wish I would have kept it.”
Gathering evidence so long after the incident has also proved challenging.

The Mabelane family, like dozens of others who have suffered similar trauma, feel that they have been failed by the ruling African National Congress [ANC] party, in power since the end of white-rule in 1994.
“The government and the ANC have not done anything for 20 years,” said Yasmin Sooka, director of the Foundation for Human Rights in South Africa, which has helped finance the Timol family’s campaign for justice.

“That is why we have been looking at these cases privately.”
Sooka’s organisation recently decided also to champion the case of Matthews Mabelane.

Time is against them. The policemen involved are elderly, if not dead.
But most importantly, Phillip Mabelane prays that justice will be done while he is still alive.