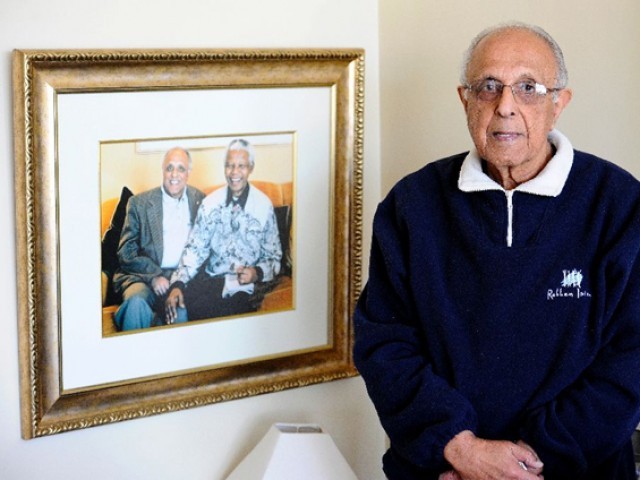 JOHANNESBURG: South Africa’s anti-apartheid icon Ahmed Kathrada, who was jailed alongside Nelson Mandela, was feted as a humble liberation hero who shunned the power and glory that came with freedom.

Unlike many struggle veterans, Kathrada, who was imprisoned on Robben Island, never held public political office after the fall of apartheid and Mandela’s election as president in 1994.

He choose instead to serve as one of Mandela’s closest advisers during his time as the country’s first black leader.

When Mandela left office in 1999, after serving a single four-year term, Kathrada also stepped away from politics — immersing himself in activism through his Ahmed Kathrada Foundation.

Released from prison in 1989, the softly-spoken Kathrada commanded huge respect within the African National Congress (ANC) party, belonging to the golden generation of freedom fighters untainted by later corruption scandals.

He was often described as Mandela’s “trusted lieutenant”, an “unsung hero” and “humble icon”.

To those close to him, he was known as “Kathy” or “Uncle Kathy”.
In his book “Long Walk to Freedom”, Mandela recalled meeting a young and impassioned Kathrada during the early days of the struggle, and then their later time on Robben Island.

“Kathy was a slender fellow unused to hard physical labour,” Mandela said, referring to the back-breaking daily work of crushing rock at the prison quarry.

Mandela recounted how Kathrada was mocked by prison warders when he could not move a wheelbarrow laden with rocks, while the guards prevented Mandela from helping his friend.

In the cells, “Kathy” was a teacher for fellow prisoners and a strategic thinker who later formed part of the ANC delegation in the negotiations that finally ended apartheid.

Born on August 21, 1929 in Schweizer-Reneke, a small rural town in what was then known as Western Transvaal, Kathrada was a second generation South African of Indian descent.

In his youth, he joined apartheid resistance movements, including the South African Indian Congress, which followed the ideals of Mahatma Gandhi’s passive resistance.

“Even as a young man, he stood out as a leader,” said retired Constitutional Court judge Albie Sachs.

Kathrada’s arrest with other anti-apartheid activists in a 1963 police raid at Liliesleaf Farm, a secret safe house outside Johannesburg, was a turning point in his life.

He was arrested along with Walter Sisulu, Govan Mbeki, Raymond Mhlaba, Denis Goldberg, Elias Motsoaledi and Andrew Mlangeni and charged with sabotage.

“There was nothing I could do,” said Kathrada, remembering how a police team burst out of a laundry van and surrounded the property.

Those arrested were tried at what became known as the Rivonia trial, including Mandela, who was already in prison.

The trial drew worldwide attention to the brutal legal system under the apartheid regime.

In 1964, Kathrada and his co-accused were convicted and sentenced to life on Robben Island prison.

“From the word go, the message was, you are going to die,” said Kathrada in 2016 at a screening of a documentary about his life.

“What we were being arrested for already warranted the death sentence.”

In 1982, after spending 18 years on Robben Island, he was transferred to Pollsmoor Prison in Cape Town, serving a total of 26 years and three months in jail.

Since Mandela’s death in 2013, Kathrada was one of the three surviving members of the Rivonia trial.

“Freedom did not fall from heaven, our freedom was fought for, sacrificed for,” he once said.

In recent years, Kathrada was a fierce critic of the ANC government under President Jacob Zuma, himself a fellow Robben Island inmate.

In 2016, Kathrada wrote an open letter to Zuma urging him to resign after the country’s highest court found the president in breach of the constitution for using public funds to upgrade his private home.

Kathrada also spoke out against corruption, offering support to Finance Minister Pravin Gordhan when he faced possible prosecution for fraud.

After being released unconditionally from prison in 1989, Kathrada applied for amnesty in the Truth and Reconciliation Commission (TRC) over his conviction in the Rivonia trial.

In a formality, the commission granted him a pardon in 1999.

The Kathrada foundation said he was survived by his wife, Barbara Hogan, also an ANC stalwart.