His wife's former husban­d was not happy with the marria­ge
By Tariq Ismaeel
Published: October 5, 2017
Tweet Email 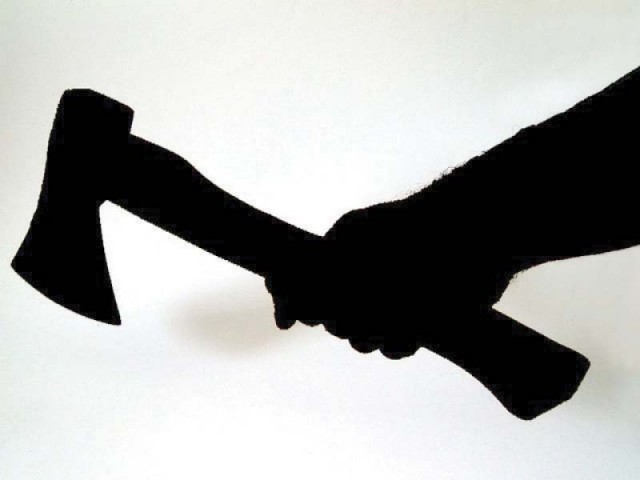 DERA GHAZI KHAN: A man was axed to death for marrying a divorced woman in Dera Ghazi Khan, police said.

An official of Choti police station told The Express Tribune that 26-year-old Sheru fell in love with Gulabo, who had been divorced by her ex-husband Azam. Later, the couple tied the knot.

He added, “The woman’s former husband was not happy with the marriage and decided to take revenge from Sheru.”

He maintained on the day of the incident, accused Azam and his accomplices barged into the house of Sheru and axed him to death. Later, the culprits fled the scene. The accused also took Gulabo with them.

Soon after the incident, the police reached the spot and shifted the body to a local hospital for legal formalities. The police have registered a case against the culprits and started investigation.

18-year-old jumps off tower in Multan ‘for love’

Earlier, a 24-year-old girl was axed to death by her family members for marrying of her own will in Yazman, Bahawalpur District.

Sughran Bibi, daughter of Allah Bachaya, had tied the knot with Muhammad Madni, a resident of Pakka Laraan, against the will of her family. Sughran Bibi was not in contact with her parents but they were making efforts to bring her back home. However, accused Allah Bachaya, his sons Zahid, Javed and Pervaiz brought the girl home by deceit.

When Sughran Bibi came to her parents’ house, the accused axed her to death in the name of honour.

In yet another incident, a man gunned down his relative over a dispute in Saddar police precincts.

Police said accused Asif Kanera had an argument with his relative Abdul Rasheed over a domestic dispute. In a fit of rage, the accused opened fire on Abdul Rasheed, killing him on the spot and fled the scene. The police have registered a case against accused Asif and started conducting raids to arrest him.