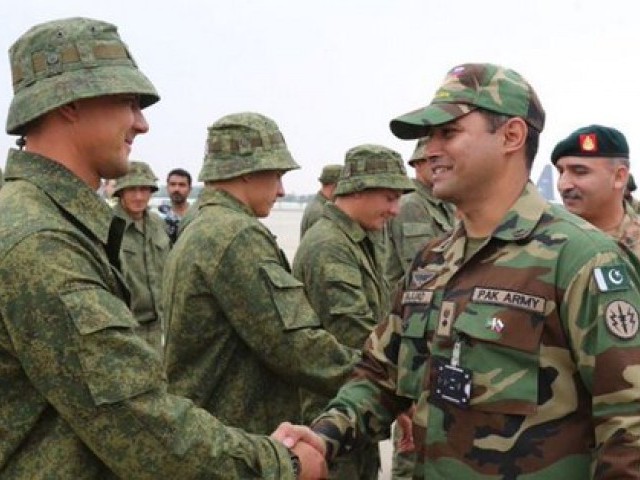 A two-week long joint exercise named ‘DRUZBA (Friendship) 2017’ between the special forces of Pakistan and Russian armies kicked off in Minralney Vody, Russia on Monday, according to an official handout issued by the Pakistan Army.

The opening ceremony was attended by senior military officials of special forces of both the countries, said the Inter-Services Public Relations (ISPR). It said the joint exercise would focus on counter terrorism operations, hostage and rescue, cordon and search operations.

Pakistan Army contingent lands in #Russia for the 2nd round of the bi-lateral 'Druzba' Special Warfare exercises. pic.twitter.com/kZOKkgQKI1

“The joint exercise will enhance and further strengthen military ties between both the countries and share Pakistan Army’s experience in war against terrorism,” the statement added.

The exercise is taking place at a time when Pakistan is recalibrating its foreign policy options in the wake of last month’s new strategy announced by President Donald Trump for Afghanistan and South Asia.

How Russia came to Pakistan’s help

Both Pakistan and Russia appear to be on the same page on Afghanistan as they have been calling for political solution to the long running conflict.

There have been greater exchanges between the two former cold-war rivals in recent years. Russian and Pakistani foreign ministers recently met on the sidelines of UN General Assembly session in New York.

Army Chief General Qamar Javed Bajwa is also expected to travel to Russia in the first week of October, a development which further underlines the growing ties between the two countries.

Relations between Pakistan and Russia have seen unprecedented growth in last few years after the two sides realised that the current geo-strategic situation required greater interaction between the two countries. In October last year, the two countries held their first-ever joint military exercise in Pakistan.

The joint military drill is seen as another step in growing military-to-military cooperation, indicating a steady growth in bilateral relationship between the two countries, whose ties had been marred by Cold War rivalry for decades.

PTI and PML-N, can you put ‘street children’ first?