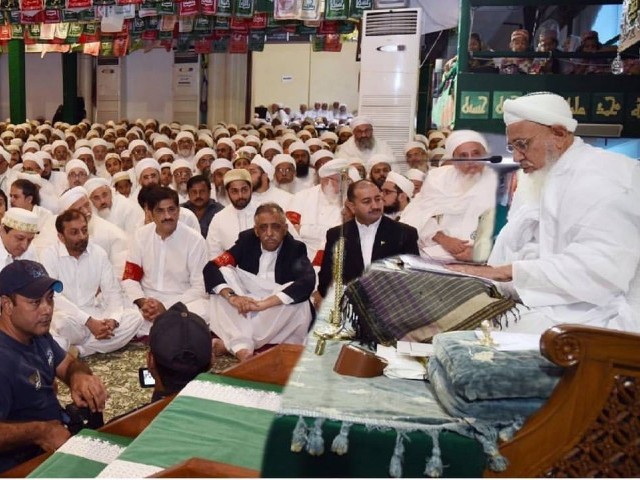 The discourse was attended by the chief minister, governor, mayor and other politicians. PHOTO: COURTESY ABDUL RASHEED CHANNA

Dr Saifuddin welcomed the participants warmly and delivered part of his sermon in Urdu, during which he emphasised on how the most beloved before Allah is one who proves to be the most beneficial to all creations. He cited examples of the life of Imam Husain AS and explained how the tragedy of Karbala is an epitome of the lesson of sacrifice, tolerance and brotherhood. He reiterated that if Muslims follow the example of Imam Husain AS, peace would reign in the world.

The Dawoodi Bohra community’s spiritual leader also prayed for the prosperity of Pakistan and expressed his gratitude to the government and people of Pakistan for inviting him to Karachi for Muharram majalis this year. He stated that the city held memories of his late grandfather, Syedna Taher Saifuddin, and father, Syedna Mohammed Burhanuddin, who had led Muharram discourses in Karachi many times, the last being 21 years ago.

Dr Saifuddin is in Karachi to lead the 10-day Muharram discourses termed ‘Ashara Mubaraka’, which is an annual event for the Dawoodi Bohras led by their spiritual leader at the beginning of every Islamic year. This year, the event began on September 21 and will run till September 30. Over 20,000 members of the Dawoodi Bohra community from across the globe as well as 35,000 members of the community from Pakistan are participating in the events in Karachi.

Shah said that he had invited Dr Saifuddin to spend Muharram in the city and address his majalis, which he kindly consented to. “We have made necessary security arrangements for the annual majalis,” the chief minister told the media after attending the majalis. “Our Bohri brothers are peaceful and cooperative gentlemen. They have also cooperated with the administration for their security,” he said.

Shah added that peace has been restored in the city through the constant efforts and political will of the government. He said that with the restoration of peace in the city, a boost has been witnessed in business activities. “People have started coming out of their homes with their families without any tinge of fear,” he said. “Dr Saifuddin has come from India to address the majalis and this is happening after 21 years,” said Shah, expressing satisfaction that the city is once again attracting visitors, investors, religious scholars and spiritual leaders.

After his address, Dr Saifuddin presented a shawl, rosary and prayer mat to the governor and chief minister.

Later, Shah reviewed the arrangements made for another majilis at KPI ground. He visited their kitchen, dispensary and sitting places. The chief minister issued directives to Karachi Additional IG Mushtaq Maher and Commissioner Ejaz Ali Khan to keep in touch with the management of the Bohra community who were organising the majalis and others programmes in order to provide necessary security and support.