‘If you cannot recover him, at least tell me where my son is buried’

‘If you cannot recover him, at least tell me where my son is buried’ 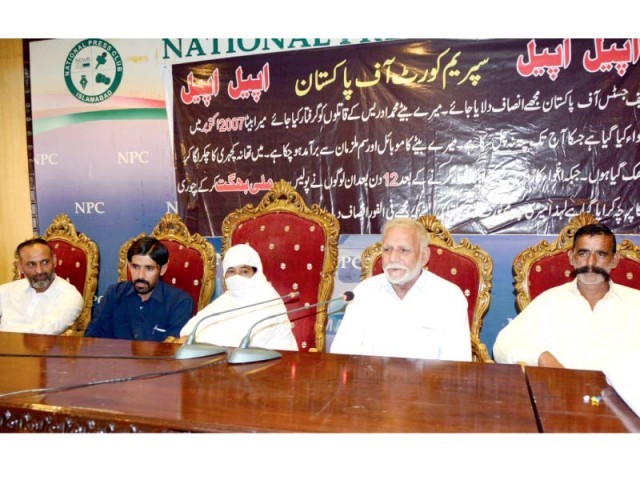 ISLAMABAD: A young man was allegedly kidnapped from his village near Islamabad a decade ago, and his ailing parents are still waiting for any word about him. The missing man’s father, after pursuing the case with police and courts for years, has now lost all hope of seeing his son ever again.

“I want to say to the police, the courts, and authorities to at least return me the body of my son or tell me where he is buried, so that an old man can die with peace,” the 70-year-old Muhammad Rafiq said. He, along with his wife came to the press club to seek media’s help in the matter on Friday. The missing man’s mother burst into tears and could not speak as she tried to talk about her missing son.

Rafiq’s son Muhammad Idress, who was 20 then, left his home reportedly with a few of his local friends on October 29, 2007, and never returned. Rafiq later accused his son’s friends of kidnapping him. Bhara Kahu police registered the case against four of Idrees’s friends on December 11 that year. The suspects were also arrested but were released after a few weeks, as the family claims police colluded with the suspects.

A decade on, the case is still open but the police still have no clue who the kidnappers were.

“Since 2007, I have knocked every door but to no avail. The suspects are wealthy and have influence … and the police never investigated the case on merit. I now demand that my son be returned to me, alive or dead,” Rafiq said, as he struggled to hold back his tears.

He said some local people who wanted to take hold of the family’s inherited lands considered Idrees an obstacle in their way, and hence they planned his removal. “He was brave and street-smart and had opposed their designs,” the septuagenarian father said.

The case lingered with the Bhara Kahu police for years before it was transferred to CIA around a year ago, but there has been no demonstrable progress by the police to solve the disappearance so far.

When contacted, Sub- Inspector Muhammad Ali, who is the current investigation officer of the case, said the case was still open but no clue had been found to the missing man.

Asked what 10 years of police investigation had established so far, he said the case had been closed earlier but was reopened later and assigned to him four-five months ago. He declined to share any further details about the case, saying they should be kept secret.