Dubai says skyscraper facades being replaced after series of fires

A man had his genitals chopped off by a spurned lover in Malappuram, a city in the Indian state of Kerala, after she found out he was marrying another woman, Mail Online reported.

The injured man, named only as 26-year-old Irshad, met up with his lover, 30, for 'one last time' before he was due to tie the knot with a bride of their parents' choice.

The scorned lover invited him to a guest house in Malappuram's Kattipuram area, where she cut off his genitals with a knife on Tuesday, it is claimed.

Adjoining guests heard him scream and they rushed him to MIMS Hospital in Kozhikode, where he is still undergoing treatment.

A video shows him lying in a hospital bed giving the thumbs up despite his condition.

A police official said: "The man is undergoing treatment at MIMS Hospital as of now. He was staying in the lodge with a woman. We have taken her into custody for questioning."

He added that the victim had suffered a partial cut and was first taken to a local hospital but had to be transferred later. 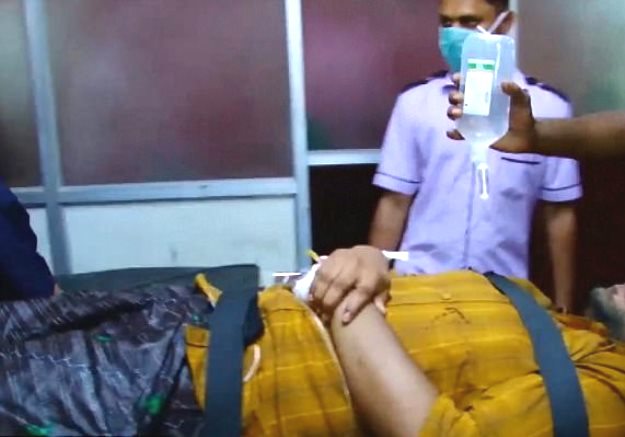 Police have refused to divulge any further information, saying that the case is under investigation.

This is not the first case where a woman has cut off a man’s genitals. In July this year, a Tamil Nadu woman was accused of chopping off her husband's genitals after a fight over his extramarital affair. A Bengali woman had also allegedly resorted to a similar brutal act in July as she was unhappy with her marriage.

A few months ago, a woman had chopped off the genitals of a swami in Kerala. She had said that she had to take such a drastic step as she was being sexually assaulted by him for about seven years. The woman, however, later changed her statement in court.

Prabhjyot Singh Madan | 3 years ago | Reply A human brain is a very funny part of of our anatomy. It gives suggestions through thought and expriences and the knowledge of right and wrong. What she did was a crime our thought says this but our expriences living in this world without justice decides otherwise. She was a victim but she followed the law of the jungle. The lady as a victim and the man as the cause both deserve jail terms. Long live india, rab rakha
Nithin | 4 years ago | Reply Hahaha...she did the right thing
VIEW MORE COMMENTS
Zahid | 4 years ago | Reply India ... Mother of Terrorism even in the bedroom and they still believe Pakistan has terrorism? Ask the man whose genitals were chopped off.
Haji Atiya | 4 years ago | Reply What a selfish woman not allowing him to share his family jewels !
Billa | 4 years ago | Reply Ata girl, kudos!
Replying to X
Saved ! Your comment will be displayed after the approval.
Error !
Error! Invalid Email.