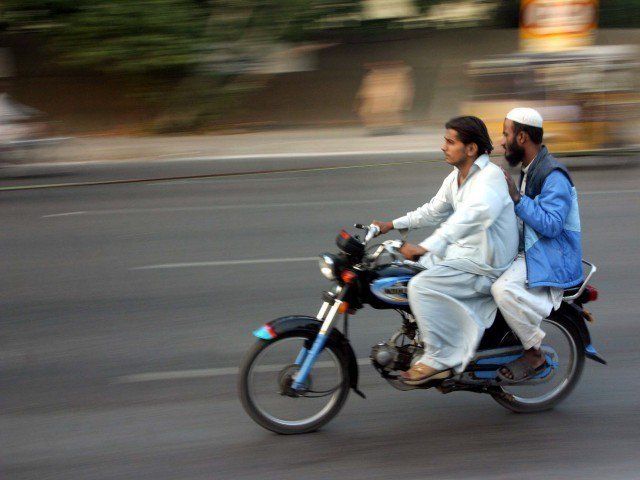 The ban will come into effect from September 27 and end on October 1. PHOTO: PPI/FILE

ISLAMABAD: The Islamabad Capital Territory Administration has decided to ban pillion-riding as part of security measures for Muharram processions and gatherings.

The ban will come into effect from September 27 and end on October 1, according to an order issued by a district magistrate on Thursday.

“Certain pillion riders are likely to resort to violence and acts of sabotage aimed at disrupting peace and tranquility causing damage to public life and property during Muharram-ul-Harram,” it read.

Over the past few years, the district administration has imposed a ban on pillion-riding on Ashura in the capital.

While pillion-riding will remain prohibited for five days, the authorities have not yet taken a decision as to whether cellular services will be suspended or not.

The authorities have also banned the use of unmanned aerial vehicles (UAVs) including drone cameras, terming them a security threat.

“These UAVs can be used by miscreants to conduct terrorist acts in areas that have been secured and safeguarded against ground attacks. Any possible terrorist attack would jeopardise security of the processions and religious gathering like ongoing Muharram and Safar Majalis/Processions besides posing threat to residents of ICT,” the magistrate’s order said.

The use of UAVs by the law-enforcement agencies, however, is exempted from the ban, which will be effective for two months.

The district magistrate has also imposed a ban on the sale of toy guns in Islamabad on the recommendation of the police.

The order stated that the toy guns which were being sold in some shopping malls could be a security risk for important personalities and diplomats in the capital.