From posh to pathetic: CBC roads are nothing to write home about

From posh to pathetic: CBC roads are nothing to write home about 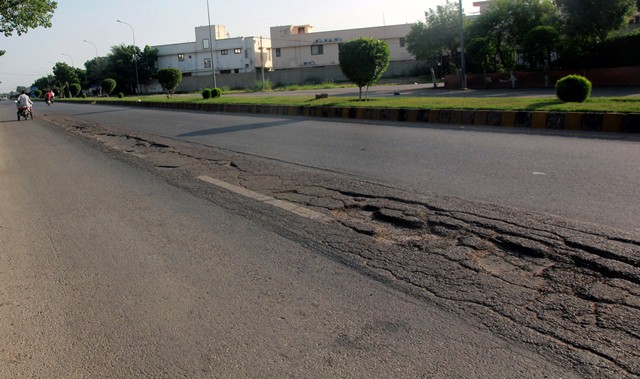 The state of many main thoroughfares in the DHA, CBC area is appalling. PHOTO: ATHAR KHAN/EXPRESS

KARACHI: Most cities in the world have ‘posh’ areas – localities that are well-developed and well-maintained. In Karachi, however, the poor state of infrastructure has reduced even the most affluent localities into a state of disrepair.

Leaving aside areas that fall within the jurisdictions of the Karachi Metropolitan Corporation or Karachi Development Authority, even the localities managed by the Cantonment Board Clifton (CBC) and Defence Housing Authority (DHA) are no longer considered all that posh due to broken roads, poor water supply and drainage and poor solid waste disposal.

Residents are no longer satisfied with the performance of the CBC, despite paying hefty amounts of tax every year. Residents have almost forgotten about what it was like to have continuous water supply to their homes and many see it as a pipedream that is unlikely to materialise during their lifetimes.

Muhammad Salar, a resident of DHA Phase-VI, told The Express Tribune that he shifted to DHA in 2003, back when Khayaban-e-Ittehad was recently-built. At the time, the thoroughfare was a favourite spot for youngsters who would race their cars or motorcycles on the road. Negligence and poor maintenance, he said, were the reasons why this main road is often covered in potholes. Salar said that Khayaban-e-Ittehad is mostly used by commuters entering DHA and urgently needs the attention of the CBC.

Ali Naqvi, a resident of DHA Phase-IV, who lives near the Yasrab Imambargah, said his relatives often term Phase-IV the ‘adopted child’, as the state of roads and drainage in the area is very poor, especially in relation to the rest of Defence. In the side-lanes and smaller streets in the area there have always been potholes, but after the recent rains they have grown even larger, he said. Naqvi added that the infrastructure conditions are lowering property values in Phase-IV. “All we can do is complain to the authorities,” he lamented.

The general secretary of the Association of Defence Residents, Asad Kizilbash, said the reason why residents have such high expectations is because they pay huge amounts of tax to the CBC. Therefore they expect better performance, he said. 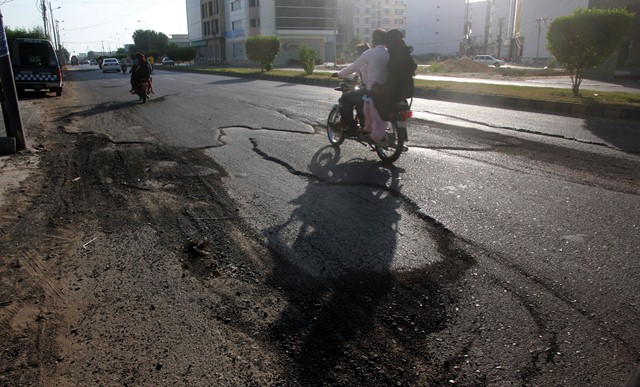 Residents are angry at CBC’s negligence, especially because they pay over Rs100,000 in taxes every year. PHOTO: ATHAR KHAN/EXPRESS

Kizilbash shared that earlier the most pressing issue in the area was the water crisis, which was never resolved. It is a basic necessity and right of any human, he said, adding that the residents have no hope that the authorities will ever resolve their issues.

Another protest against CBC over water crisis

People are now concerned about the rapidly deteriorating road network and indifferent reactions of the CBC towards this important issue. “What is the CBC actually doing?” asked Kizilbash. He added that by not working actively in the past, the work has piled up and even after the rains there was no action by the CBC, which indicates their lack of seriousness as a civic body.

“Approximately more than Rs100,000 is paid every year as tax for a house built on 500 square-yards, which is a huge figure and far more than other parts of the city. However, even then residents are not getting any services,” Kizilbash.

The issues pertaining to DHA Phase-VIII, which has recently been developed and is currently being maintained by DHA, not CBC, are also rather troublesome. An improper sewerage system, lack of internet connection and water supply are some of the issues recently-shifted residents are complaining about.

“Seeing the sorry condition of DHA and Clifton, I wonder what the situation is of slums in CBC jurisdiction,” said Kizilbash. The slum area that fall within the jurisdiction of the CBC are Delhi Colony, Madniabad, Punjab Colony, Chandio Village, Bakhshan Village, Chaudhry Khaliquz Zaman Colony, Pak Jumhoria Colony, Lower Gizri and Hazara Colony.

Come out and speak to us, say DHA residents to CBC head

MPA Samar Ali Khan, who represents PS-113, shared that while it seems like the representatives are doing nothing, they have conducted numerous meetings with the officials of DHA and CBC.

Khan said the CBC lacks transparency in its system, which raises a lot of questions. Lack of transparency is the answer to the query of all the problems people here are facing, he said. The MPA added that though the situation in this area may be better than that in other areas of the city, it takes only a moment to send the area into chaos.

He said that CBC’s system consists of bureaucrats and dealing with bureaucrats is a tough job. It seems like CBC lacks the will to improve its performance, he added.

Despite several attempts, CBC elected representative Aziz Suharwardy and CBC Chief Engineer Riyaz Sheikh could not be reached for their comments.