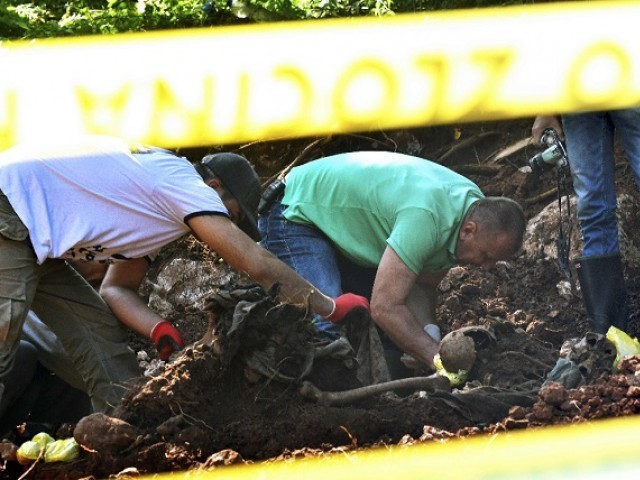 Bosnian forensic expert, Murat Hurtic inspects a set of human remains, at the site of a newly discovered mass grave in the village of Tugovo, near Eastern-Bosnian town of Vlasenica, on Wednesday. PHOTO: AFP

SARAJEVO: The remains of potentially dozens of victims from Bosnia’s 1990s civil war, most likely Bosnian Muslims, have been exhumed from two newly-discovered mass graves, the Missing Persons Institute said on Wednesday.

One of the graves was discovered in the mountainous area of Koricanske Stijene in central Bosnia, where more than 200 civilian men were executed by Serb forces in August 1992, following their eviction from a northwestern region.

It marked one of the most brutal episodes in the inter-ethnic conflict, which lasted from 1992 to 1995 and killed around 100,000 people.

At the end of the war, 31,500 people were reported missing. Since then, the remains of 25,000 victims have been exhumed from hundreds of mass graves, according to the institute, leaving 6,500 unaccounted for.

“Since the beginning of the exhumation at Koricanske Stijene on September 7, about 40 clusters of human bones have been exhumed, essentially incomplete skeletons,” said Lejla Cengic, a spokesperson for the institute.

Bosnia: from outbreak of war to Dayton peace accords

She said that the identities would be determined by DNA testing, adding that the clusters did not necessarily correspond to the remains of the same number of people.

Five previous exhumations in the same area, between 2003 and 2013, recovered the remains of 117 victims and the search is still ongoing for 98 others, Cengic said.

The second mass grave was uncovered in the eastern region of Vlasenica.

“Exhumation work began on Tuesday and so far we have discovered the complete skeletons of 10 people. We believe they’re Bosnian Muslim victims killed in 1992,” she said.

According to the country’s victims’ associations, 2,600 Bosnian Muslims from Vlasenica were killed during the conflict.