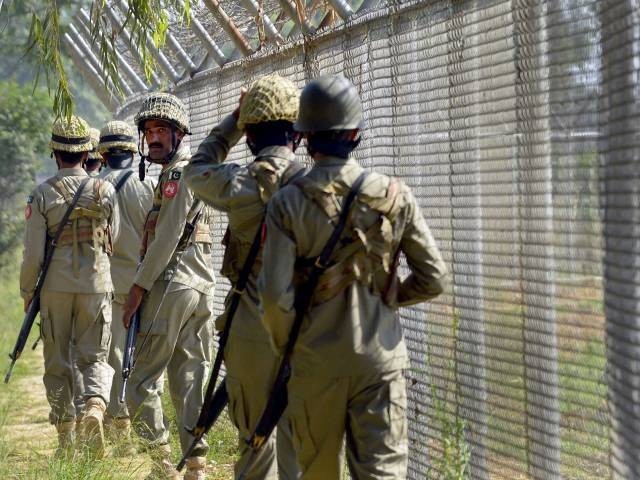 A file photo of Pakistan Army a the disputed Line of Control (LoC). PHOTO: AFP

PESHAWAR: A man, 30, killed himself by jumping off the Arbab Khalil flyover on Wednesday. He was a soldier of the Pakistan Army.

A police official while talking to The Express Tribune said that the man – identified as Ziaur Rehman, resident of Chitral – committed suicide in the morning.

“He was found with just a CNIC in his pocket but investigations later revealed that he was from Pakistan Army’s Kashmir regiment, belonging to platoon FC 37,” said the officer.

“His brother told us that he had just spent a five-day leave at home in Chitral and was on his way back to Kashmir via Peshawar as per his routine,” the official added. The motive behind the suicide was not clear yet, he added.

Earlier in July, an officer of Pakistan Air Force (PAF) was found dead, under mysterious circumstances, in a room at the PAF headquarters, officials said on Tuesday.

A medical board has been constituted to ascertain the cause of the officer’s death. Group Captain Rizwan Ateeq was found dead, hanging from a window grille in a room on Monday morning.

PAF officials told the police that the officer had apparently committed suicide by wrapping one end of a sheet around his neck and the other tied to the grille.

Sources said that the officer had reportedly been found dead at around 7:30am. However, local police were not informed till noon. Officials at the  Pakistan Institute of Medical Sciences (PIMS) confirmed to The Express Tribune that a three-member medical board had been constituted to ascertain the cause of the officer’s death.

His body was handed over to his family after an autopsy was conducted by officials at the hospital on Tuesday. Results of the autopsy are still awaited.

No perks, privileges for Utman tribes in Mohmand