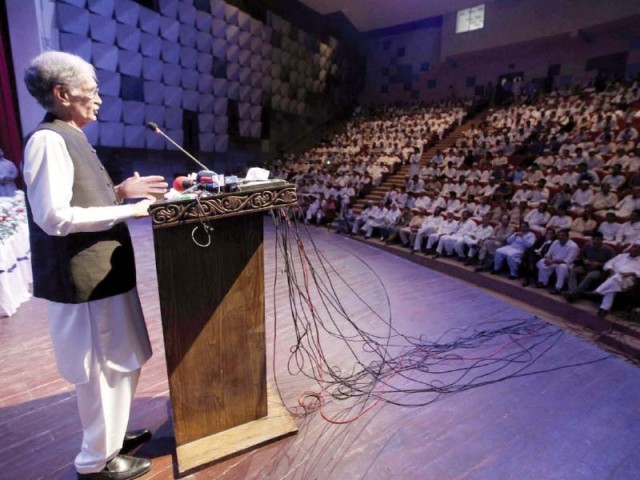 PESHAWAR: The Khyber-Pakhtunkhwa government has awarded 173 laptops to government school students who secured the top positions in their Secondary School Certificate (SSC) examination in Peshawar.

The distribution ceremony was organised by Peshawar District Government.

K-P Chief Minister Pervez Khattak, who was the chief guest on the occasion, distributed laptops worth over Rs10 million with the aim of promoting education and encouraging government school students to compete in exams.

Among the recipients, there were 107 boys and 63 girls from different government schools of the district. The top three overall position holders in Board of Intermediate and Secondary Education (BISE) Peshawar were awarded three laptops.

Addressing the ceremony, Khattak said that education is the topmost priority of the K-P government for which a record budget has been allocated

He said that initially, the incumbent government faced a number of challenges since most of the schools did not have teachers or basic facilities. However, the government declared an education emergency in the province and things started improving.

He added that the Pakistan Tehreek-e-Insaf (PTI) government had recruited 40,000 teachers for both boys and girls’ schools and overcame the issue of missing facilities.

Later, while talking to The Express Tribune, Munawar Khan – who had topped from the Mian Gujar High School by securing 900 marks out of a maximum 1100 marks – said that his mother used to make hand fans to fund his education.

“With support from my mother, who makes and sells hand fans to support my studies, I got this position,” he shared.

He added that hard work is essential for securing high marks and suggested that poor students should not be discouraged and with hard work, they can realise their dreams.

Munawar’s mother, who also attended the ceremony, said that she always wanted to see her son secure the top position. She lauded her son and said that his hard work had led him to success.

She requested the government to support her son in his pursuit of
higher studies.

Peshawar District Nazim Asim Khan disclosed that they had allocated a substantial amount of education and will keep education at the top of their agenda in the forthcoming budget.

A point to note is that this is for the very first time that the district government distributed laptops amongst position holders.