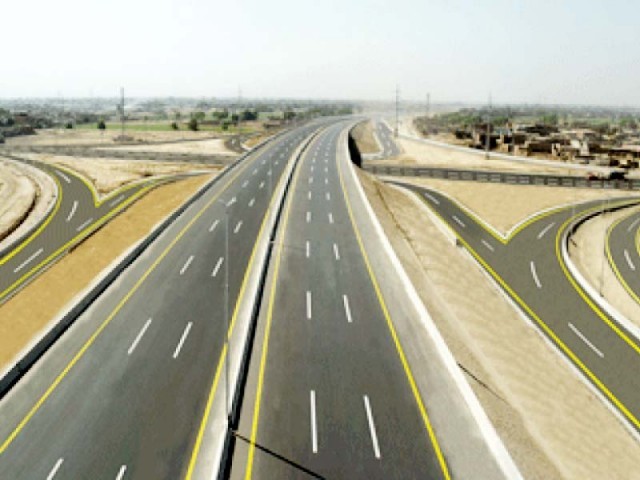 The corridor would also enable smooth movement of goods from Karachi port to other parts of the country, the minister added. PHOTO: FILE

The chief minister said that 500 million gallons per day (MGD) of waste water generated in Karachi is being disposed into the Arabian Sea without any treatment. “This is a very serious issue and I want to resolve it at any cost.”

Briefing the visiting team, P&D Chairman Mohammad Waseem said that work on Rs36.117 billion S-III is in progress. The provincial government from its resources is investing Rs7.982 billion to enhance the capacity of three treatment plants from 561MGD to 300MGD and to construct a new treatment plant of 200MGD.

He said that as per National Environmental Quality Standards (NEQS) requirement, the industrial units are required to undertake pre-treatment of industrial effluent before discharging into municipal sewerage system.

Presently, 94MGD industrial effluent is generated from five industrial estates of Karachi and is dumped directly into the open drain as municipal sewerage system.

The chief minister said that due to cost escalation of the S-III, the provincial government needs Rs28 billion to complete the project.

He said that with the establishment of five combined effluent treatment plants, the provincial government would be able to meet WTO requirements for seafood exports and other issues.

Talking about the lining of KB Feeders, Irrigation Special Secretary Junaid Memon said that the design discharge capacity of the channel is 9,100 cusecs but due to silt it has come to 7,500 cusecs. The official said that it would cost Rs20 billion.

Stressing on the traffic situation in the mega-city, Shah was of the view that Karachi should have a proper ring road to facilitate traffic; hence there is an urgent need to construct a south-eastern bypass.

The corridor would also enable smooth movement of goods from Karachi port to other parts of the country, the minister added.

The expression of interest for construction of the road on a build-operate-transfer basis was invited by the local government, the P&D chairman informed the meeting. He added that Rs61 billion would be required for construction of a 47.2km corridor (three lanes either side).

The meeting also discussed construction of Ghotki-Kandhkot bridge to reduce the distance between the two cities.

The AIIB delegation was also briefed on other projects but they showed their interest in just these four.

Pandian urged the chief minister to send details, present status of the projects and concept papers to them so that they could present them in their board meeting. He said that his team was satisfied with these four projects and would also support the provincial government to establish a desalination plant to provide drinking water to Karachiites.