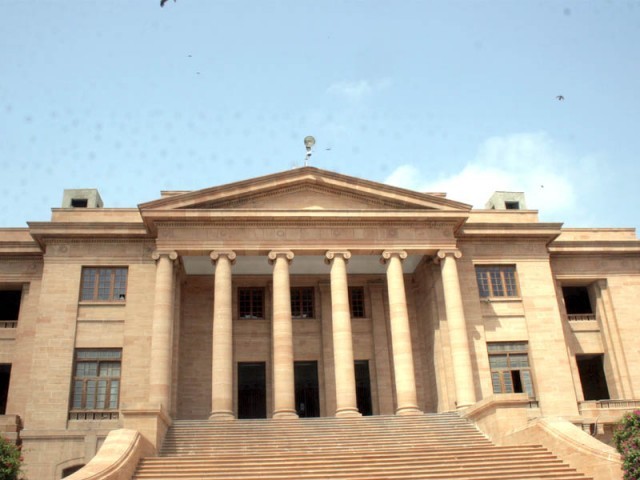 'The criterion as referred in Punjab Local Councils’ Rules, 1981, shall be followed and no street, road, college or institute shall be named after the persons who have not contributed to the welfare of society in any field.' PHOTO: EXPRESS

HYDERABAD: In a plea challenging naming of public places after questionable individuals, the Sindh High Court (SHC) ordered the provincial government on Monday to follow laws that are being practiced in Punjab.

The two-member bench comprising justice Salahuddin Panhwar and justice Fahim Ahmed Siddiqi summoned the Sindh chief secretary on September 22 to apprise the court what criteria that are being followed to name places after individuals in the province.

“Meanwhile, the criterion as referred in Punjab Local Councils’ Rules, 1981, shall be followed and no street, road, college or institute shall be named after the persons who have not contributed to the welfare of society in any field,” the court order reads.

The rules only allow denominating a place on the name of Pakistan’s founder, a freedom movement leader, a deceased national personality, a martyred soldier, head of a foreign friendly country and a notable Muslim character from the history. The rules barred naming a place after an elected representative and a public servant.

The court observed that though it is a prerogative of the provincial government to name a place, the practice required to stand “the test of reason”.

“… to acknowledge and appreciate the services of such a person; and to inspire and motivate others for performing such services,” the bench elaborated what it described as the rationale for the denomination.

“… in entire province the roads, streets, overhead bridges, educational institutions, hospitals, public parks and universities are named or renamed after people related to the ruling, privileged, feudal or political class,” decried the petitioner advocate Sajjad Ahmed Chandio, who is an office bearer of Sindh High Court Bar Association and a faculty in Sindh Law College.

During the hearing, Chandio said that in Sindh the ruling class has started the practice naming public places after their parents and children – pointing to Bilawal Medical College, Jamshoro and other such institutes.

Giving references of how such places are denominated in the law abiding countries, he contended that the Sindh government does not follow any standardised criteria for the same purpose. “Sudden changes in the names of roads, streets and other places also deprive the people of a sense of history,” he maintained.

The lawyer prayed the court to order the provincial government to remove names of the people from the places who do not fulfil the criteria. He also pleaded the bench to form a commission of experts in arts, history, education, science, literature and public service to form the rules for naming a place.

He further requested the court to order that no politician can give their name or one of their family members to such a place. The SHC made all the local bodies in Sindh respondents in the case while ordering secretary local government, chairman planning and development board and commissioner Hyderabad division to submit reply.