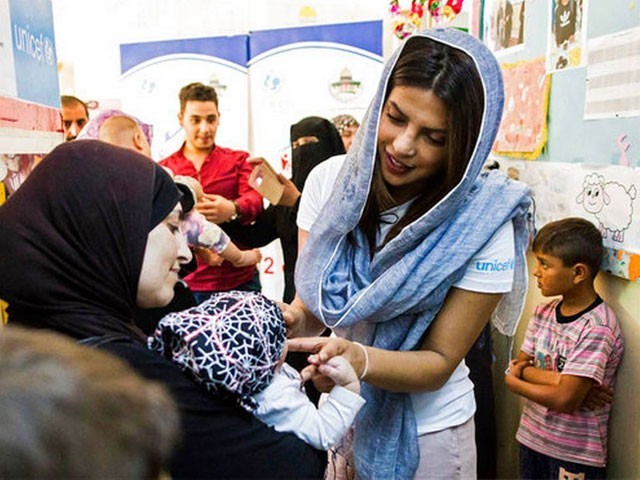 Actor Priyanka Chopra said that the world must do more to help Syrian refugee children get an education. After chatting and joking with young refugees at an after-school centre in Jordan’s capital, the Baywatch beauty seemed to be on a mission, reports Hindustan Times.

A UNICEF goodwill ambassador and Bollywood and Hollywood star, Chopra said that if the governments don’t help with the donations, maybe individuals can.

“We need to take it into our own hands because this is our world and we only have one of it,” Chopra told The Associated Press at the end of her first day in Jordan.

“I think the world needs to understand that this is not just a Syrian refugee crisis, it’s a humanitarian crisis,” she stated.

Without sufficient support, “this can be an entire generation of kids that could turn to extremism because they have not gotten an education,” she said in an interview.

It was reported that around 5 million Syrians have fled civil war in their homeland since 2011, many settling in nearby Jordan, Lebanon, Turkey, Iraq and Egypt.

On Sunday, Chopra, a light gray scarf slung over her hair, visited a UNICEF-backed children’s centre in Jordan’s capital of Amman.

Cultures are so lovely.so different yet so similar. Kalam is arabic for pen and it's kalam in Urdu/Hindi too. We found that funny. Since the kids were learning English I thought Pencil may be appropriate… #MissionForChildren #ChildrenUprooted #PCInJordan #ChildrenOfSyria @unicef

Chopra later said she was moved by the hopefulness of the children she met.

Chopra said that she didn’t realise until working in America that it’s “difficult for a woman of colour” to be cast in a wide range of roles.

She said change will come when “people like me and other people, other actors that are coming in from other parts of the world, in global entertainment …we dig our feet in and say I don’t want to only play the stereotype of what you expect me to be.”

I have never done this when I do field trips, but on this one I feel compelled to reflect on what I feel after every session because I felt a lot. The anger and agony I felt seeing these beautiful hopeful children ravaged by war was so raw. The world has seen the pain war has left in Syria but the resilience and joy and hope in spite of it is so inspiring to me. These kids are my inspiration. They should be yours too. PLS GO TO www.unicef.org and DONATE whatever you can… let's make this a collective #MissionForChildren #ChildrenUprooted #PCInJordan #ChildrenOfSyria @unicef

She recalled being insecure about her looks as a teenager.

“I was considered darker toned, so in my head, I was not pretty and that’s the ideology,” said Chopra, who once did an ad for a skin lightening cream, a decision she later regretted. At the same time, she said she’s seen “a lot of girls who are light-skinned in America who say, ‘I am too pale, I’m not pretty’.”

This is Ammar(5), Ayat(8), Sulaiman (5 months) Wardshan(9) and they have an elder brother Saleh(10) who works at a grocery store to help supplement the family income, for only 2 Jordanian Dinar (that's less than $3 USD.) Their father is a day laborer. Sulaiman needs a 2nd surgery because he has a clot in his nose. The family moved from Syria to Jordan 5 years ago. When I asked their mother what would be her wish…considering the war hasn't ended, she said "if we can't go home all I want is for my kids to get an education so they can fend for themselves when they are older and help rebuild Syria. We are blessed, we have enough to survive…others have much less." They didn't even have furniture in their home. The largesse of heart and compassion she had through her tears moved me to pieces. PLS GO TO www.unicef.org and DONATE whatever you can… let's make this a collective #MissionForChildren #ChildrenUprooted #PCInJordan #ChildrenOfSyria @unicef

In India, she has become selective, preferring more complex roles to the pretty girl parts of her early days.

Chopra is also producing films in regional languages, to create an outlet for artists who might otherwise by overlooked by the Hindu-language Bollywood juggernaut. The latest is a film about two refugee children who come from Nepal to India.