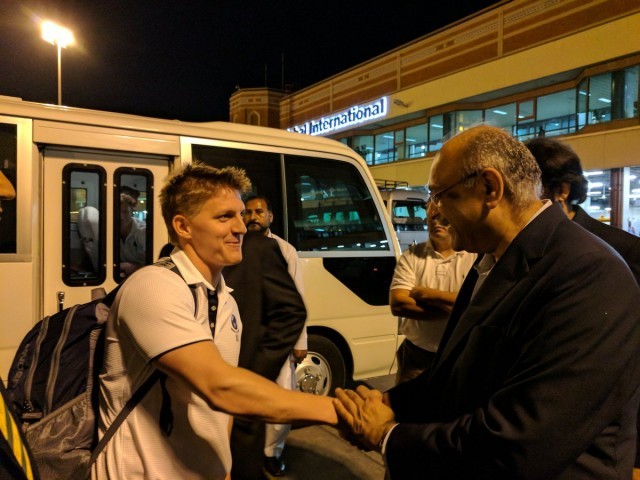 Pakistan has not hosted top-level international cricket — barring five limited over matches against minnows Zimbabwe in 2015 since the Sri Lankan team bus was attacked by terrorists in March 2009, killing eight people and injuring seven players and staff.

The World XI, which will play three T20Is from Tuesday, arrived around 2:00 AM local time with air surveillance and dozens of police vans in attendance as the team was whisked to their hotel.

Both the hotel and stadium will be cordoned off with 9,000 police and paramilitary staff deployed during the next five days.

A fourteenth player, Samuel Badree of the West Indies, will arrive later Monday.

Earlier on Sunday, Malik Mohammad Khan, a spokesperson for the Punjab government, said authorities were providing “foolproof security for the World XI with a big contingent of security officials deployed”.

Parts of the city near the stadium will be cordoned off, with shops and restaurants around the venue to be shut for the duration of the series while spectators will have to pass through multiple security checkpoints.

Since the 2009 attack, Pakistan have been forced to play most of their “home” games in the United Arab Emirates — with the Pakistan Cricket Board complaining they have incurred losses of around $120 million.

But security has dramatically improved across Pakistan in the last two years, signalling hopes for the slow revival of international sport in the country.