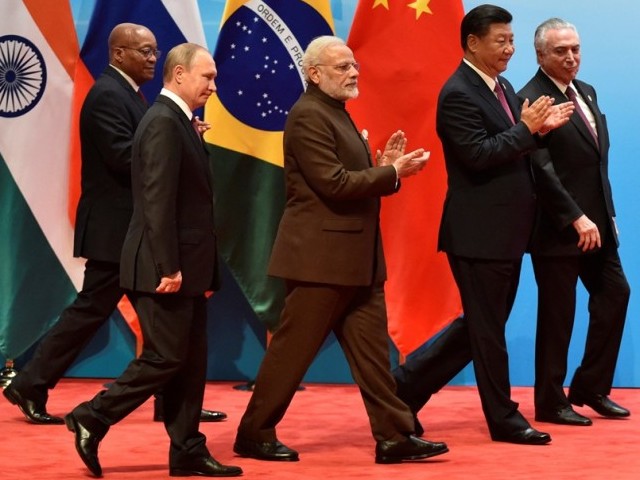 XIAMEN, CHINA: Leaders of the five emerging economic powers have for the first time named militant groups as a security concern in the South Asia region while urging the United Nations to develop a “genuinely broad international counter-terrorism coalition” to combat militancy.

The move came in a declaration passed by heads of state from Brazil, Russia, India, China and South Africa (BRICS) at a summit in the Chinese city of Xiamen on Monday.

The group called for an immediate end to violence in Afghanistan.

“We, in this regard, express concern on the security situation in the region and violence caused by the Taliban, (Islamic State), al Qaeda and its affiliates including Eastern Turkistan Islamic Movement (ETIM), Islamic Movement of Uzbekistan, the Haqqani network, Lashkar-e-Taiba, Jaish-e-Mohammad, TTP and Hizb ut-Tahrir,” the leaders said in the declaration as they called for the patrons of these organisations to be held to account.

The declaration noted that states had a primary leading role and responsibility in preventing and countering terrorism, stressing that there is a necessity to develop “international cooperation, in accordance with the principles of international law, including that of sovereign equality of states and non-interference in their internal affairs.”

it also noted that establishment of sustainable peace required a comprehensive, concerted and determined approach, based on mutual trust, mutual benefit, equity and cooperation, which addresses the causes of conflicts, including their political, economic and social dimensions.

“We condemn unilateral military interventions, economic sanctions and arbitrary use of unilateral coercive measures in violation of international law and universally recognised norms of international relations. We emphasise that no country should enhance its security at the expense of the security of others,” stated the declaration.

The group also called on the international community to form a broad coalition to counter terrorism with the UN taking up a central role in this regard. However, it noted that the world body needs to undergo reforms.

“We … reaffirm the need for a comprehensive reform of the UN, including its Security Council, with a view to making it more representative, effective and efficient, and to increase the representation of the developing countries so that it can adequately respond to global challenges,” the declaration read.

Cold water was poured over the jubilation of Indian media over the inclusion of some militant groups in the BRICS declaration with former Pakistan High Commissioner to India Abdul Basit noting that the groups mentioned were already sanctioned in Pakistan.

“Bizarre! Pakistan has long banned these outfits,” noted Basit who had retired from the hot seat in New Delhi in July.

“We’re also mentioned in Amritsar Heart of Asia declaration paragraph-14 with Pakistan on board,” he added, referring to the December 2016 summit in India.

China tells India to refrain from pointing fingers at Pakistan

The group had named Lashkar-e-Taiba, which India blames for cross-border attacks including the 2008 assault on its financial capital Mumbai in which 166 people were killed. Pakistan banned the group in 2002.

Jaish-e-Mohammad, which New Delhi blames for a 2001 attack on its parliament, was banned by Islamabad in 2002.

Islamabad also denies any involvement in attacks in India including in the disputed region of Kashmir and says it is itself a victim of attacks.

There was no immediate reaction to the statement from the Foreign Office in Islamabad.