Peggy Whitso­n, 57, is also the oldest female astron­aut in the histor­y of space explor­ation
By AFP
Published: September 3, 2017
Tweet Email 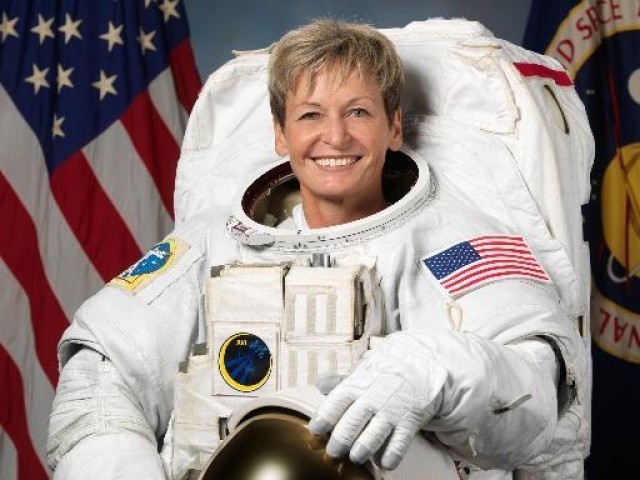 Peggy Whitson, 57, is also the oldest female astronaut in the history of space exploration, was the first female International Space Station commander, and holds the record for number of spacewalks (10) by a woman. PHOTO: NASA

WASHINGTON: A record-shattering NASA astronaut touched down to Earth on Sunday, finishing a 288-day mission that put her over the top as the American who has spent the most cumulative amount of time in space.

Peggy Whitson, 57, is also the oldest female astronaut in the history of space exploration, was the first female International Space Station commander, and holds the record for number of spacewalks (10) by a woman.

The biochemist completed a mission at the International Space Station that began in November 2016, covering 122.2 million miles (196.7 million kilometers) and 4,623 orbits of Earth.

US vice president ignores Nasa’s ‘do not touch’ sign

She and crewmates Jack Fischer of NASA and Fyodor Yurchikhin of Russian space agency Roscosmos landed in Kazakhstan at 7:31 am local time Sunday (0121 GMT) in a Soyuz MS-04 spacecraft.

Whitson has racked up 665 days in space in her career, more than any other American astronaut. She is eighth on the all-time space endurance list, NASA said.

Her colleague Jack “2Fish” Fischer, 43, went into space as a rookie but has won over space-watchers with his boundless enthusiasm during his four-and-a-half months aboard the ISS.

He likened the feeling of his spacewalk with Whitson in May — the 200th ISS spacewalk — to a “ginormous fondue pot, bubbling over with piping hot awesomesauce.”

“Heading home soon… I hope I infected a few of you with my passion for space. Never stop learning and growing. I dare you to dream!” he tweeted Friday.

NASA discovers 10 new Earth-size planets that could have life

NASA footage showed Whitson brought out last from the capsule before being seated and handed flowers by a member of the crew at the landing site.

After earning a doctorate in biochemistry in 1985, Whitson worked as a NASA scientist for seven years before starting as an astronaut in 1997.

On this most recent mission, Whitson conducted experiments with human stem cells, blood samples and grew several crops of Chinese cabbage, according to posts on her Facebook page.

“The best part, was that after we harvested for the science, we got to eat the rest!” she said of her greens.

In an interview before departing the space station, Whitson said she was looking forward to flush toilets (“Trust me, you don’t want to know the details”) and pizza.

But, “I will miss seeing the enchantingly peaceful limb of our Earth from this vantage point. Until the end of my days, my eyes will search the horizon to see that curve,” she said, according to a transcript of the interview posted on the NASA website.

She noted that she’s not totally comfortable with the attention she receives for her various records and her status as a role model.

“I honestly do think that it is critical that we are continuously breaking records, because that represents us moving forward in exploration,” Whitson said.

The scientist also has a silly side. To celebrate the July Fourth holiday, she posted photos and a video of herself and Fischer wearing loud red, white and blue outfits, striking poses in zero gravity.

“I am not sure what the future holds for me personally, but I envision myself continuing to work on spaceflight programs. My desire to contribute to the spaceflight team as we move forward in our exploration of space has only increased over the years,” she said of her plans.

The astronauts’ return comes as the Texas city of Houston, home to NASA’s Johnson Space Center, has been struggling to get back to normalcy after a week of deadly flooding triggered by Hurricane Harvey.

“As a result of the impacts of Hurricane Harvey, NASA is reviewing return plans to Houston of Whitson, Fischer and the science samples landing in the Soyuz spacecraft,” the space agency said.

As Texans return to flood-hit homes, many say ‘Our house is history’