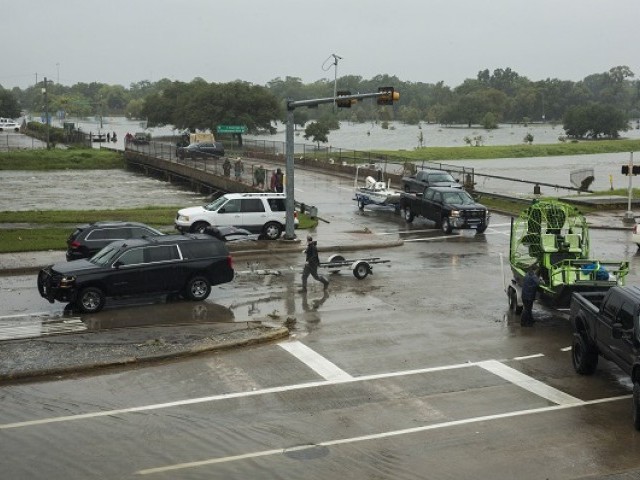 Search and rescue volunteers launch their boats near Bray Bayou and Loop 610 to rescue flood victims in the Meyerland neighborhood after Hurricane Harvey inundated the area on August 28, 2017 in Houston, Texas. Harvey, which made landfall north of Corpus Christi late Friday evening, is expected to dump upwards to 40 inches of rain in areas of Texas over the next couple of days PHOTO: AFP

HOUSTON: Rescue teams in boats, trucks and helicopters scrambled Monday to reach hundreds of Texans marooned on flooded streets in and around the city of Houston before monster storm Harvey returns.

US President Donald Trump promised that the federal government would be on hand to help Texas along the “long and difficult road to recovery” from the historic storm. The medical examiner’s office for Harris County, which includes the city of Houston, confirmed six deaths since Sunday “potentially tied to Hurricane Harvey.” Three people were previously known to have died as a result of the storm.

But officials also warned that the danger has not yet passed, with more families still stranded or packed into emergency shelters and the tropical storm once more gathering strength on the Gulf coast. Houston mayor Sylvester Turner said more than 8,000 people had been brought, soaking and desperate to shelters in America’s fourth largest city, and defended the decision not to evacuate before Harvey struck at the weekend.

“Search and rescue, that’s the number one emphasis, the number one priority for the rest of the day,” he said, recalling that around 100 people had died the last time officials tried to empty the city of more than six million. The 911 emergency line has received more than 75,000 calls, but city officials urged residents facing life-threatening storm water floods to remain on the line and trust that help will come. Houston fire chief Samuel Pena urged patience, promising: “We fully recognize there are many other people out there in distress situations and we intend to get to every one of them.”

Coast Guard commander Vice Admiral Karl Shultz told CNN that he had 18 helicopters in Houston, and weather permitting about 12 in the air at any one time, alongside those of the National Guard. “If you can get to your roof, wave a towel. Leave a marking on the roof so helicopter crews can see you,” he said, describing the volume of emergency calls as ‘staggering.’ Harvey hit Texas on Friday as a Category Four hurricane, tearing down homes and businesses on the Gulf Coast before dumping an ‘unprecedented’ nine trillion gallons of rainfall inland.

“It’s the biggest ever, they are saying it is the biggest, it’s historic,” Trump said, at a White House press conference. He is due to visit Texas on Tuesday to survey rescue efforts and may return to Texas and Louisiana at the end of the week. The Texas bayou and coastal prairie rapidly flooded, but the region’s sprawling cities – where drainage is slower – were worst hit. Highways were swamped and street after street of housing rapidly rendered uninhabitable, with power lines cut and dams overflowing.

The US Army Corps of Engineers began to open the Addicks and Barker dams – under pressure from what the agency has dubbed a “thousand-year flood event” – to prevent a catastrophe on the outskirts of Houston. Latitia Rodriguez was rescued along with her husband, children and grandchildren by the Williamson County police department, negotiating the flooded Route 90 in boats.

“We have to evacuate. We have too many kids. So we had to save our babies,” she told AFP. “There’s a lot of people over there. We would like to help everybody but we can’t. We have our own kids.” Meanwhile, the disaster is far from over: Harvey has turned back on itself and is hovering on the Gulf Coast, sucking up more rain and threatening a new landfall on Wednesday. And, after the storm, will come clean-up and recovery. “We actually anticipate that as many as a half-a-million people in Texas will be eligible for and applying for financial disaster assistance,” Vice President Mike Pence told KHOU Radio in Houston.

“We know it’s far from over. We know there’s more rain coming. The flood waters will likely continue to rise,” he warned. Trump – facing the first major natural disaster of his presidency – has also declared a state of emergency in neighboring Louisiana, next in line for a downpour. While the disaster response is now focused on the huge city of Houston, center of a fast-growing but loosely-planned urban area, many of those living in smaller communities by the coast were also driven from their homes.

Robert Frazier, a 54-year-old foreman mechanic, left his home in La Porte, south of Houston, with his housewife Judy on Sunday morning and made it as far as a motel in Hankamer on the road towards Louisiana and still in Harvey’s path. “We’re trapped,” Frazier said, speaking to AFP after he had tried to return home for some of his abandoned possessions, but finding the highway cut. “I haven’t been through nothing like this.” His wife Judy said she could only pray the rain would stop, after leaving home with just two sets of clothes, their medicine and their dog.

The National Weather Service said that between June 1 and Sunday, Houston had received 46 inches (117 centimeters) of rain – almost as much as it would expect in a year. “The breadth and intensity of this rainfall are beyond anything experienced before,” it said. Boats also were being deployed, but more were needed. Harris County Judge Ed Emmett appealed to residents to use their own vessels. While many citizens rushed to help their neighbors, some were less helpful, and Houston police chief Art Acevedo warned that his officers were on the lookout for looters.