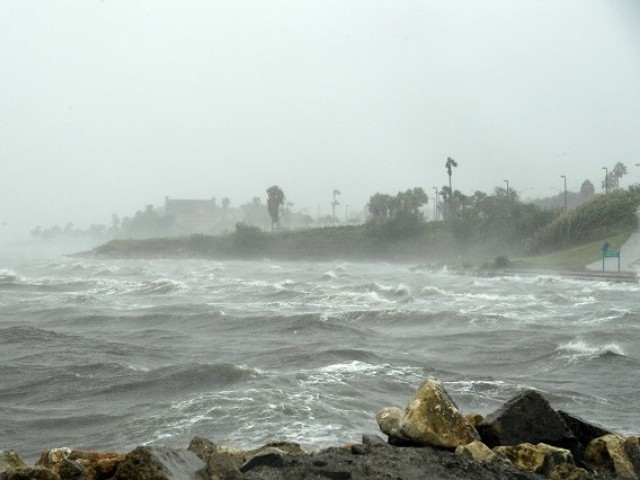 Strong winds batter seaside houses before the approaching Hurricane Harvey in Corpus Christi, Texas on August 25, 2017. Hurricane Harvey will soon hit the Texas coast with forecasters saying it's possible for up to 3 feet of rain and 125 mph winds PHOTO: AFP

COPUS CHRISTI: Hurricane Harvey slammed into the Texas coast late Friday, unleashing torrents of rain and packing powerful winds as it became the first major storm to hit the US mainland in 12 years.

President Donald Trump granted Texas Governor Greg Abbott’s call to declare a “major disaster” zone in the state in order to speed federal aid to the millions in harm’s way. The arrival of the storm – which was packing sustained winds of 130 miles (215 kilometers) an hour – was the first major domestic challenge for Trump, who the White House said would head to the affected region early next week.

“We can obviously tell already at this stage this is going to be a very major disaster,” a somber Abbott said, as more than 1,000 National Guardsmen were activated to help with evacuation and recovery. Indeed, the National Hurricane Center warned that “catastrophic flooding” was to be expected due to the massive amount of rain expected and the huge storm surge, which could reach 13 feet (nearly four meters) in some places.

Meteorologists warned that tornadoes were possible through Saturday from Texas into Louisiana, which was also expected to take a major hit from the storm. Harvey, the first major storm of the annual Atlantic hurricane season, has forced hundreds of thousands to flee their homes, and crippled oil production in the Gulf. Landfall came in the small town of Rockport, not far from Corpus Christi, which is a major hub for the US oil industry.

Rockport Mayor Patrick Rios had blunt words for those determined to stay, telling them to “mark their arm with a Sharpie pen, put their social security number” – to be identified if found dead. Before the storm hit, the US Federal Emergency Management Agency (FEMA) prepositioned emergency supplies and authorities issued mandatory evacuation orders in many areas. As he headed to the Camp David presidential retreat for the weekend with his family, Trump said: “Good luck to everybody.”

Harvey, the most powerful hurricane to hit the mainland since Wilma struck Florida in 2005, could dump up to 40 inches (more than one meter) of rain on the area over the next few days – and cause billions of dollars in damage. 2005 was a huge year for hurricanes – before Wilma, Hurricane Katrina pummelled New Orleans, leaving more than 1,800 dead and becoming one of the greatest hiccups in the presidency of George W. Bush.

Coastal Texas is a fast-growing area, with some 1.5 million people moving into the area since 1999. Authorities said the combination of dense growth and perhaps a year’s worth of rain falling in just four or five days could prove deadly. Supermarket aisles were stripped bare, homes and shops had boarded up windows, and long lines snaked outside gas stations. The National Hurricane Center (NHC) warned of the “complete destruction of mobile homes,” of many buildings “washing away,” and some areas being left “uninhabitable for weeks or months.”

In 2005, Bush faced severe criticism after FEMA appeared unprepared for the devastating damage inflicted by Hurricane Katrina. “Keep on top of hurricane Harvey don’t make same mistake Pres Bush made w Katrina,” Republican Senator Chuck Grassley urged the US leader in a tweet. In a series of tweets throughout Friday, Trump said he was closely monitoring the storm’s progress and said he was “here to assist as needed.”

“Storm turned Hurricane is getting much bigger and more powerful than projected. Federal Government is on site and ready to respond. Be safe!” he said after arriving at Camp David. Later on, he announced: “At the request of the Governor of Texas, I have signed the Disaster Proclamation, which unleashes the full force of government help!”

In Corpus Christi, many residents appeared bent on sitting the storm out, packing sandbags to protect their homes – until the supply of sandbags ran out. Already, nearly 50,000 people in the city had lost power. Sheriff Frank Osborne of Matagorda County, where evacuations were mandatory, described the high stakes. “I’m not going to put one of my deputies’ life on the line to save somebody that didn’t leave when they were asked to,” he told local TV station KHOU.

Officials in Houston, the biggest city in the storm’s path, closed its port but did not anticipate mass evacuations. Inland cities like San Antonio welcomed evacuees on Friday, but some at the shelters told AFP that supplies were lacking. “Everything I had, I had to leave. Everything. It was bring it with me or lose my life,” said Michael Allen, a resident of Corpus Christi. “I felt like I didn’t want what happened to the guys in New Orleans… to happen to me.”

FEMA chief Brock Long said the most pressing danger was the storm surge, but also said many inland counties should prepare for ‘significant’ flooding. US authorities said about 22 percent of crude production in the Gulf of Mexico was shut down as of Friday – accounting for more than 375,000 barrels a day. But total US production stands at 9.5 million barrels a day, experts say.

In Louisiana, Governor John Bel Edwards issued an emergency declaration for his entire state, as authorities in New Orleans – where Katrina did the most damage – readied high-water rescue vehicles and boats. “Given our current models, we believe our drainage system can handle this forecast,” said New Orleans Mayor Mitch Landrieu.
Edwards described a “worse-case scenario” in which the storm leaves Texas, gains new strength over the heated waters of the Gulf, and then heads toward Louisiana.

Meteorologist Eric Holthaus told AFP the prospect of the storm stalling on the coast, lashing it with heavy rain for days, was “just terrifying.”