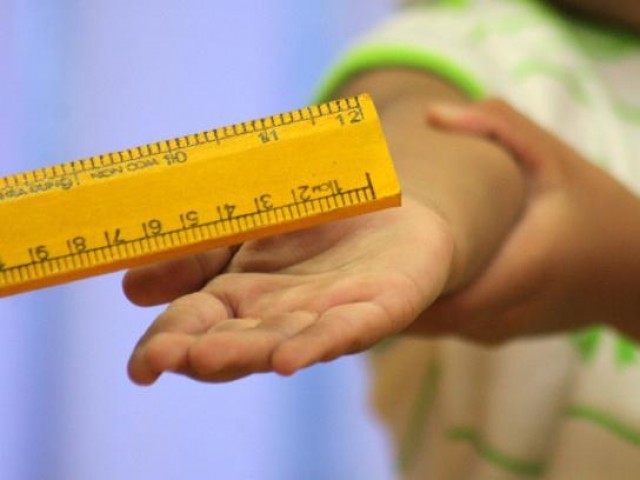 FAISALABAD: First grader Abdullah came to school in the morning to learn a lesson, but not the kind his teacher tried to administer when she allegedly beat the boy black and blue.

The incident took place in the Raza Abad police jurisdiction where the Grade-1 student was beaten senselessly by his teacher for making a noise in the class. The student was assaulted till he suffered injuries to the back, cheeks, head and eye.

“The student was rushed to the Divisional Headquarter Hospital for treatment where his parents also acquired a medico-legal certificate in which it was confirmed that the boy was hit with punches and even sticks,” Shahbaz Ahmad, the child’s father, told the media on Saturday.

He added the school’s administration was trying to hide facts in cahoots with the Raza Abad police station. He alleged that the cops refused to take any action on the complaint he lodged at the front desk.

With tears running down his cheeks, Shahbaz Ahmad said his son Abdullah was a student of first grade at a private school in Arshad Town. “On August 24, I went to school to take my son home, but saw him emerge without his schoolbag and he was crying as if he had been tortured.”

“When I asked, my son said he was brutally assaulted by one teacher, Sajida, for no rhyme or reason.

He said some classmates were not sitting on their respective seats when she entered into the class just before home time.”

Shabazz further alleged that Abdullah was beaten by Sajida, while another staff member of the school, Nadia, also joined her. “Both teachers inflicted various injures on my son’s body with sticks and punches.

This was confirmed by the doctor in his medical examination report”. The father said he lodged a protest with school owner Muhammad Nawaz, who instead of pacifying him, misbehaved. “He made the security guards throw me out from the school,” he alleged.

“On the same day I moved a formal complaint with Raza Abad Station House Officer Abid Hussain for registration of a case against the teachers and the school owner, along with a medical certificate at the front desk. He said the complaint was registered under serial no 801 on August 24, but no action was taken thereafter.”

When contacted SHO Abid Hussain told The Express Tribune that this was a serious issue and therefore he deputed ASI Atif  Mahmood to verify the allegations instead of filing a case. Therefore, no case was registered”.

At the same time, ASI Atif Mahmood told The Express Tribune he received a complaint from the victim’s father and made efforts to take the version of the school administration. “Action will be taken after face to face meetings between both parties. On Friday night, I received a complaint from school owner Muhammad Nawaz in which he alleged Shahbaz Ahmad had threatened him of dire consequences and also harassed teachers without any justification,” said the ASI. He added the police were not bound to registration a case based on mere allegations. He added it was part of their job to verify the content of the complaint from various sources and also acquire information from complainant and respondent party.”

On the other hand, when school owner Muhammad Nawaz was contacted by The Express Tribune, he said the child was not tortured and the story was cooked up by Shahbaz Ahmad to get the tuition fee waive off. He also claimed the complainant misbehaved with him and other school staff. “I have moved a complaint to the area police.