Abdull­ah Khan was injure­d in the same attack three days ago in which his 70-year-old team leader was murder­ed
By Shamsul Islam
Published: August 26, 2017
Tweet Email 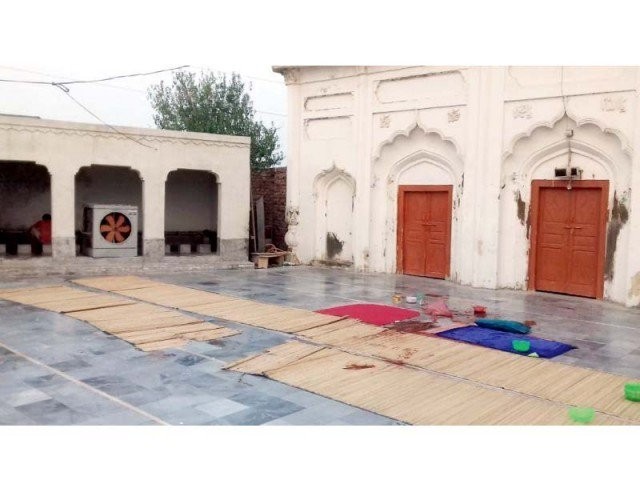 FAISALABAD: Abdullah Khan, a Tableeghi Jamaat member who was injured in an attack in Chiniot three days ago over a disagreement about religious beliefs, succumbed to his injuries on Friday.

Khan, 57, was part of an 11-member team of the Tableeghi Jamaat that travelled from Raiwind to Chiniot for preaching. The team leader, Waliur Rehman, was murdered in the same attack on Wednesday in which Khan was injured. Khan was admitted to the Allied Hospital, Faisalabad where he breathed his last.

The team camped at Chiniot on August 20 to apprise the Muslim community about the teaching of Islamic jurisprudence and worship.

They camped in Qila Asiyaan on the outskirts of Chiniot and started door-to-door preaching. During this, Rehman, Khan and their group went to the house of Ikram Khan, a student of Darul Uloom Muhammadia Ghousia.

Saddar Police Station SHO Muhammad Afzal told The Express Tribune that  Waliur Rehman had an argument with Ikram Khan over a difference of opinion over religious beliefs in the presence of Abdullah and others on last Tuesday.

“On the day of the incident, Rehman and Khan were sleeping in a mosque when accused Ikram and Imran attacked them with a spade,” he added.

“As a result, Rehman was killed on the spot while Abdullah suffered critical injuries on various parts of the body.”

Khan, who had suffered critical injuries on various parts of his body was shifted to Allied Hospital in critical condition where he succumbed to injuries on Friday night.

“The accused in his statement under section 161 Criminal Procedure of Code said that deceased had committed blasphemy by uttering disrespectful remarks against the Holy Prophet (PBUH) and so he killed him, considering it his religious belief and duty.

The officer said Ikram was now regretting that he committed the murder.

Protesters burn US flag, effigies of Donald Trump in Multan