Findin­gs show only a tiny fracti­on of all disput­es goes to courts­
By Rizwan Shehzad
Published: August 26, 2017
Tweet Email 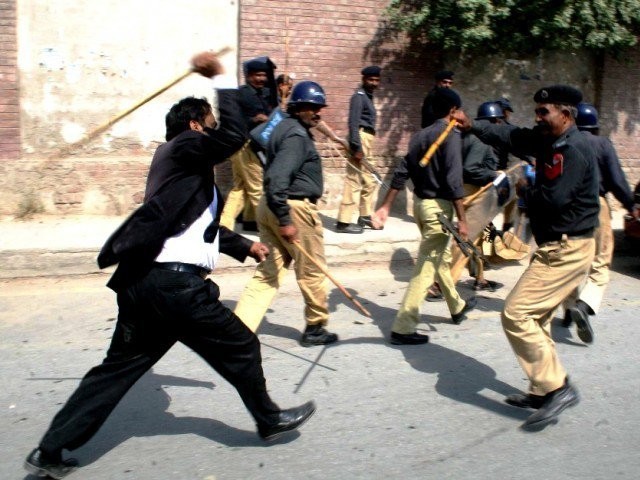 Findings show only a tiny fraction of all disputes goes to courts. PHOTO: EXPRESS

ISLAMABAD: Pakistan ranks at 106 among 113 countries in the category of civil justice system, according to a World Justice Project survey whose findings were released on Friday.

The survey, which was conducted in Pakistan in collaboration with Gallup Pakistan, reveals that the country’s justice system was in a very bad shape. The findings of the survey were released at a Seminar on ‘Rule of Law in Pakistan’ in Islamabad.

The country’s overall ranking is 106, which is not just very low by global comparisons but also lower when compared with its South Asian neighbors and other low-income countries.

The survey also shows that a very few Pakistani choose to take their disputes to the court. When asked, around 40% of the respondents said they had experienced a serious dispute in the last 12 months. However, most of the participants said that they chose to do nothing about it.

Amongst the minority that did pursue disputes, most chose to take their dispute to a traditional gathering or local leader for resolution.

Few of those, who approached a state institution, chose the police. Only a tiny fraction of all disputes went to courts.

Commenting on the findings, speakers at the seminar said the irony is that the state-supported court system seems to be failing in handling even the small fractions of disputes that do come to it for resolution.

Umer Gilani, a lawyer who acted as consultant for the project, commented that “the worst performing part of our judicial system is civil justice.”

“Everyone knows that you just can’t go to a court and get a simple contract enforced,” he said, adding unfortunately reform of the civil justice system is simply not on anyone’s agenda. “We hope that these findings will stimulate some fresh thinking amongst judges, parliamentarians and law reform experts,” he said.

Chief Research Officer of WJP Dr Alexandro Ponce, who spoke via a video link, pointed out the ‘silver linings’ in the survey’s findings, saying, “Pakistanis seem to have a high degree of trust in their fellow citizens. Crime rates are lower than in many other countries. And while trust in the court system is low by global comparison, it is still more than the trust people have in the police.”

Additional Attorney General for Pakistan Afnan Karim Kundi told the audience that while the present situation is grim, reform is possible. He called for the re-structuring of bar councils in order to ensure stricter regulation of legal education and legal practice.

The World Justice Project is a US-based think tank which conducts scientific surveys on the topic of rule of law and access to justice in 113 countries of the world. Those interviewed in this survey include a mixture of common people and lawyers drawn randomly from major cities of the world.