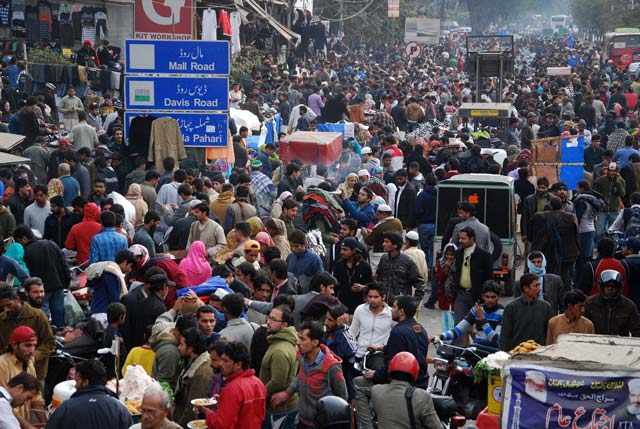 ISLAMABAD: Pakistan’s population has surged to a staggering 207.8 million, showing an increase of 75.4 million people in 19 years, according to provisional summary results of the 6th Population and Housing Census 2017 that were presented in a meeting of the Council of Common Interests (CCI) on Friday.

The population was just over 130 million in 1998, the year when the 5th census had been conducted. This means the country has seen a 57% increase in the population at an annual rate of 2.4%.

The government had deployed nearly 118,000 officials escorted by tens of thousands of troops and police to carry out the 70-day data-gathering drive in March launched on the orders of the Supreme Court.

The majority of the people – 52.9% to be precise – still live in Punjab, but its share in the population pie has declined when compared with the 1998 census results.

Balochistan and Khyber-Pakhtunkhwa are the beneficiaries of the reduction in Punjab’s share, as Sindh’s share in the total population remains unchanged – at 23%.

This might result in a proportionate reduction in the allocation of the National Assembly seats of Punjab, as well as its share in the federal divisible pool, although the overall number of seats of all the federating units would boost due to a 75.4 million increase in the population over the past 19 years. About 82% of the federal divisible pool is distributed on the basis of population.

Why the census is important for Pakistan

Sindh is the most urbanised province having 52.02% population in urban areas – a result that could disturb rural-urban quotas of the provincial assembly seats and jobs.

Of the total urban population of the province, 68% is concentrated in three major cities – Karachi, Hyderabad and Sukkur.

The CCI –- the constitutional body headed by the prime minister with four chief ministers as its members – discussed the provisional summary results on Friday.

“However, the final results will be available next year. The CCI decided that the figures will be further debated in the Inter-Provincial Coordination Committee (IPCC) where a strategy will be devised about the future course of action,” said a source.

Population census source of fear and hope for minorities

“After discussing the statistics in the IPCC, the census results will be presented to the federal cabinet for approval.”

There was a debate in the CCI about whether to hold the next general election on the basis of new results, as the law does not permit fresh delimitation of constituencies on the basis of provisional results, said sources.

They said the Election Commission of Pakistan (ECP) had informed the government that it may hold the next general election on the basis of the new census results, if the final results are provided by October this year.

Sources said the CCI discussed the possibility of amending the relevant laws to allow holding of the general elections on the basis of the provisional results.

The population census results are exclusive of Azad Jammu & Kashmir and Gilgit-Baltistan.

The Pakistan Bureau of Statistics (PBS) conducted the census in the two territories but did not release their results as part of the country’s population due to their special status.

The PBS had conducted the exercise in two phases across Pakistan under the supervision of the military. The population results will be used to determine the federating units’ share in the federal divisible pool, allocations and delimitation of the National Assembly and provincial assemblies’ seats and determination of provincial job quotas.

Punjab still remains the most populated province with 110.01 million inhabitants, forming 52.94% of the total population.

Punjab’s population has grown at an annual rate of 2.13%, – the lowest pace of growth among all the federating units and also lower than the national average.

Sindh remains the second most populated province with 47.886 million people, which is 23% of the total population.

Sindh’s population has grown by 57.3% or 17.44 million during the past 19 years, but its overall share in the national population remains stagnant.

Sindh’s annual growth rate remained 2.41% – slightly above the national average. Sindh’s urban population has increased to 52% as compared to 48.9% in 1998.

Its population has grown by 12.78 million or 72% – the second maximum increase. The annual growth rate in K-P stands at 2.89% – the third highest among all the federating units and above the national average.

During the past 19 years, its population has grown by 5.8 million or 88% – the maximum increase in the population of any federating unit in terms of percentage.

The province’s annual growth rate remained 3.37% – the highest after the Islamabad territory and far above the national average. The urban population in Balochistan is 27.54% – significantly better than 23.3% of 1998.

The Islamabad Capital Territory (ICT) population stands at 2.0 million, which is 1.2 million higher than the 1998 census. In percentage terms, it has grown by 149%.

Islamabad has the highest annual growth rate of 4.91%, which is more than double of the national average. The share of urban population in Islamabad has significantly declined from 65% to 50.57%. There are about one million or 47.2% women in the capital territory.

The annual growth rate in FATA remained 2.41%, equal to the national average. The urban population is only 2.83% while 49% are women.